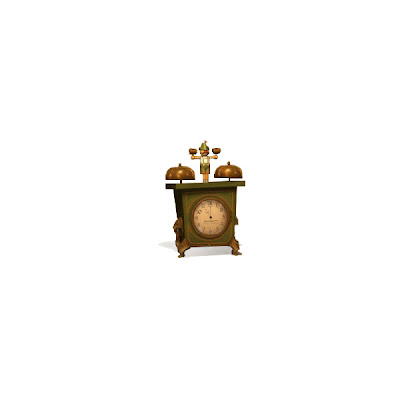 Walt Disney Pictures has released a couple of previews of the Dean Wellins short "Tick Tock Tale" which has yet to be released...

I know that some have felt it would be with "Tangled," but as of last month the decision was that there was no short that matched the tone of the film and one wouldn't be included. This could change and I hope it does, but as of a few weeks ago it wasn't the case. Hopefully Ed and John will change there minds and give a platform to this little gem from the director of their possible 2014 animated feature.

And after they give us this, give us more shorts please...
Posted by Honor Hunter at 7:01 AM

Typed it in a hurry. Sorry.

Off by about a year. Presuming the boarding process goes well. You never know, just look at "Brave."

What is is with Disney not putting shorts in front of their Thanksgiving animated films- at least not when I see them? My family has made a tradition for the last few years of seeing Disney's Thanksgiving film on opening day or very close to it, and if memory serves (and it may not necessarily)it seems like there was a lot of talk about having a short in front and it got changed as the premiere got closer.

Wasn't Bolt supposed to have How to Hook up Your Home Theater? It didn't when we saw it. Enchanted was sans short too. Yikes I don't even remember what if anything opened last year at Thanksgiving.

I even remember going to see Return to Neverland against my better judgement just to see the John Henry short- what did they show instead? A Pluto cartoon. I have no idea why.

How to Hook up Your Home Theater was put in front of National Treasure 2.

I'm not holding my breath anymore. The day I believe Disney will actually let the public see a new short is the day I see it. Every new movie it's the same thing.

I just no longer care or have any interest in the shorts coming from Walt Disney Animation Studios. The last one to get wide release was How to Hook up Your Home Theater back at the end of 2007. Everything since then has been "talked about" when it comes to being in front of something, but in the end they never appear. I am tired of being teased.

So what did really happen with Brave?

Disney needs to make more shorts like Runaway Brain. OR, make new shorts with Mickey Mouse and...Oswald the Lucky Rabbit. In retro-style. In the same cartoon. Damn, that would cause a sensation!

Honor: 2014 I think is the year of Musker & Clements new film.
Sure! Dean will work hard on his film... two years before its release date, Lasseter will replace him with two cliché directors. I love WDAS... the real "director driven studio"
The public is not fool, is misinformed. I do not understand why is necesary to lie, creating that artisticaly happy and false atmosphere, why not accept publicly what both studios really are. This is a shameful scenary.

Just watched the "Tick Tock Tale" clip. It was wonderful! What's keeping Disney from releasing these short films in theaters? None of the shorts matched the tone of "Tangled"? "Boundin'" didn't match the tone of "The Incredibles", but that didn't hinder my enjoyment of either.

Derrick: "Ratatouille" and "Bolt" both benefitted from the change in director. Just sayin'...

this is getting stupid

What about people? What about artists?...
Bolt was good, Dragon was great. Brad Bird is Brad Bird.

Disney is really making a huge mistake if they are choosing not to show this with Tangled. Again, the aforementioned Boundin'/The Incredibles pairing was a perfect match-up in my opinion, they just worked off each other perfectly even if they were completely different from each other. Same with Lifted and Ratatouille, or need I bring up 1993's dark and violent drama A Far Off Place being teamed with Roger Rabbit in Trail Mix-Up? I rest my case.