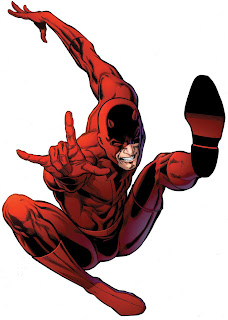 The Marvel Universe is filled with thousands of characters...

Unfortunately, some of the major ones (Spider-Man, X-Men, Fantastic Four, etc.), have their film rights locked with studios that aren't owned by the Mouse.  Some of those have had their rights expire, while others have almost expired (Ghost Rider, which will likely join Disney soon.).  But one that was relinquishment to Marvel Studios in the fall of last year was The Man Without Fear.  Also known as "Daredevil".

So far the heads of the studio have been pretty quite about any direction they have for the character in the MCU.  But my Bothans sent a transmission that that may change soon.  And by soon, we mean sometime over the next phase of Marvel films.  Certainly Matt Murdock won't be appearing in the Second Phase of films that Kevin Feige has in store for moviegoers, but plans are being worked to introduce him in the Third Phase.

As of now, there is no plan for coming out with an actual stand alone film, but possibly introducing him in one of the other character's films or possibly "Avengers 3".  It's not ruling out a reboot of the character by Marvel Studios, but it's thought that an introduction to him among other characters will justify Daredevil getting another chance to swing across the silver screen in his own film.  So we may not see him upfront in his own film, but we will see him.


UPDATE:  Wow.  Literally hours after posting this, word has started to spread about an interview that Feige did with Newsarama (Hat Tip: /Film).  In it he was asked about taking ownership of the character and confirmed it.  Let the speculation begin, but let it start with what my Bothans told me.

This seems like a smart move. Make movies, like 'The Avengers' with multiple heroes, see who the audience connects with, and make films centering around them. Or just introduce the characters that way. Seeing how 'Iron Man 3' is currently reaping the success from the 'Avengers' film (rather than the previous lackluster Iron Man movie), it looks like a great idea to try doing other movies that way too.