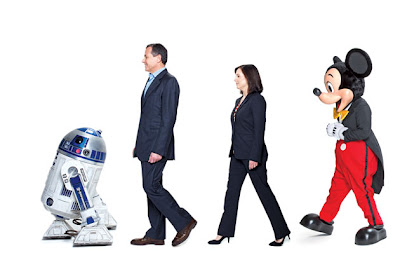 I've seen a lot of people talking about the layoffs that have been coming from Lucasfilm lately...

And there has been a lot of focus on stating that "Disney is shutting down this" or "Disney is cutting employees at that" type of headlines.  Well, I can tell you that the blame for most, not all, but most of these decisions can be laid at the feet of one person:

Not Bob Iger, not anyone else.  Lucasfilm is a business unit of the Walt Disney Company.  It is part of the Mouse, but it is a business.  No part of the company is a charity and when overlapping of jobs/tasks happen it is wasteful and any rightly ran company will want to cut cost where they can.  Disney isn't the government and can't print money to pay for its services.  But each branch has control of its own core business.  There is a great deal of autonomy in the divisions.  Kevin Feige runs Marvel Studios with little interference from Team Disney, just as John Lasseter and Ed Catmull run Pixar Animation Studios without too many eyes peering over their shoulders.  The same is true for the small company they bought up in Marin County.

Kathleen Kennedy is a smart producer, and she's a shrewd executive that has a business plan to follow.  She is going to take a more active roll in the company than The Bearded One did, and she is also embarking on a course that is different from where George originally intending to go.  The path forward will be under her watch, and she's doing what she has to make Lucasfilm viable in the massively expanding Disney World.  She isn't being pressured, she isn't bowing to Iger's draconian demands; she is in charge and is the one making these decisions.  And she has a strategy that has been implemented since she was hired.  Lucas trust her, and so do I.  The first fruit of that strategy will be the seventh Star Wars film and that won't blum till 2015.

Between now and then there will be plenty of announcements that bring into focus her plans.  But understand that they are her plans, not the evil Disney Suits tightening the screws now that they own George's precious little jewel.  Will they work?

This post reads like you are making excuses for KK. Your points are valid, but any company manager worth their mojo knows that it is best to allocate resources where they are best suited, even if it means re-allocation rather than dismissal. Loyalty is the reward for faith in your colleagues.

KK has a great track record. I hope she is cutting excess "fat". But she is making rash moves that indicate a desire to impress her new bean-counting benefactors rather than streamlining operations. In light of the mouse's long history or excising worthy talent to bolster the bottom or smooching the right derriere, it looks like business as usual in Burbank.

so is she in charge of helping plan the star wars attractions?

P.S.: Honor Hunter is not making excuses for anyone! He's being honest as usual!

You, Anonymous #1, are only making things up because he's saying things you either don't want to hear or don't fit your twisted, made-up views.