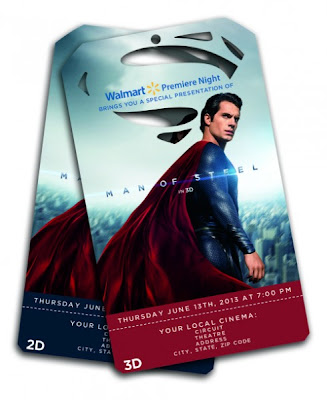 The Bunny and Walmart have made a deal to give moviegoers a chance to purchase tickets for their upcoming "Man of Steel" film in advance.  Those screenings will take place at selected screenings in certain cities.  Warner seems to be quite hyped to launch this film, which, if successful will be the start of the DC Cinematic Universe.  Think of it as their "Iron Man" film.  And although there have been plenty of films before, this would mark the beginning of a shared universe concept.  The Walmart deal also includes several other opportunities:

• Priority Purchase of Blu-ray Combo Pack or HD Digital Download: Each ticket bought at Walmart will feature a code on the back that allows customers to pre-order their own Blu-ray Combo Pack or HD Digital Download of “Man of Steel,” which will contain exclusive film content.
• Official “Man of Steel Experience” Mobile App: Fans can bring Superman to life with the official “Man of Steel Experience” augmented reality app. The app allows customers to take photos with the superhero, as well as unlock special photo frames by pointing their phone at “Man of Steel” signage in their local Walmart. To download the app please visit: Apple App Store or Google Play.
• Exclusive Original Digital Comic Book: Customers will receive a free original Digital Comic Book written by “Man of Steel” screenwriter David Goyer with every ticket.
• “Man of Steel” Merchandise: Beginning April 28, a variety of “Man of Steel” merchandise such as t-shirts, electronics, posters and more from top brands will be available at Walmart stores and at Walmart.com.
We won't know till the numbers start to come in if "Man of Steel" will be a success, but the buzz and reaction so far is extremely positive.  This deal with Walmart is an example of that confidence.  We should know later this year the status of "Justice League" and with that, the new "Batman" reboot/sequel.  But we don't need another origin for the Caped Crusader, everyone knows how he began by now.
That could be said for the Last Son of Krypton as well, though...
Posted by Honor Hunter at 10:57 AM

OMG. I am waiting for it. I can’t hold my beath until I watch it.

Your last sentence says it all: I have no idea how another Superman reboot got "green lit"...no matter how good (or bad) it is! There's plenty of other stories to tell.