No Man in Suit. 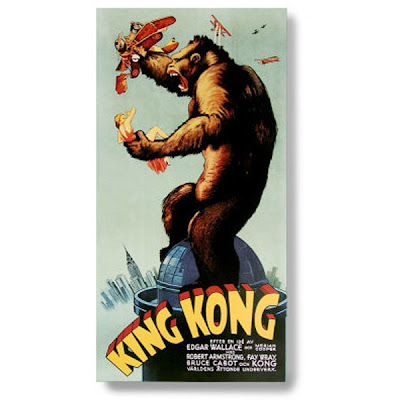 I know this is a blog that focuses primarily on Disney and all things surrounding the Mouse, but on occasion we give time to the competition and other entertainment in general...

Here is a case where I whole heartily applaud Universal Studios for doing something that is pitch perfect and totally cool. This is the kind of thing that would give Mickey competition and I like competition... it makes everone the better for it.

The Suits over at the Big U announced the other day something that many a fan had wished for but didn't expect. King Kong returns to Universal Studios Hollywood. After the fire destroyed the set which guest would see when they rode the tram, it was announced that new attractions would take it's place. Well, it looks like the new attraction is based on the old. Well actually it's based on Peter Jackson's 2005 remake of "King Kong" which is set in the 1930's. I love that they're doing this. I loved that film. Not that it's in its own place from the original which I love as well. The 1976 version I've never liked. I love the fact that it's going to be set in the 30's and I expect if these Suits are smart they'll have Jackson involved heavily with the creation of this new attraction. Here's the press release:

“The Eighth Wonder of the World” Rises From Ashes to Astound Studio Tour Guests:

King Kong Re-Emerges In A Fierce New 4-D Attraction in 2010 at Universal Studios Hollywood, The Entertainment Capital of L.A.

Larry Kurzweil, President and Chief Operating Officer, Universal Studios Hollywood, said: “King Kong has been an integral part of Universal Studios Hollywood for decades and, after last year’s fire, we knew he had to be resurrected for our Studio Tour guests. We’re very excited to announce that not only are we re-introducing King Kong, but we’ve completely re-imagined the experience and will incorporate this legendary icon into a truly innovative Studio Tour attraction.”

In the new attraction, guests will don special glasses as they enter a darkened soundstage aboard the Studio Tour trams and will be transported— via the magic of Surround Digital 3D projection —deep into the dark heart of the world of Skull Island. They’ll survive a close encounter with a swarm of monstrous bats, only to be confronted by the terrifying presence of Kong himself. Suddenly, an enormous, ravenous 35' tall dinosaur will challenge Kong and guests will feel their trams jolt, roll and shudder as they find themselves caught in the middle of a ferocious showdown between the great ape and the giant lizard. The action will immerse guests in the battle between the two colossal predators.

A previous King Kong attraction was introduced at Universal Studios Hollywood in 1986 and remained a much-admired part of the Studio Tour until it was destroyed last year.

King Kong, known as “the eighth wonder of the world,” has been called “the experience for which movies were invented.” Since first appearing on the screen in the 1933 original classic, “King Kong” has been re-made twice, each time on a tremendous scale, earning a total of seven Oscar and three Golden Globe® nominations.

Most recently, the 2005 version took the best elements of the original “King Kong” story and adrenalized them with up-to-the-minute effects magic and the alchemic talents of a superlative group of filmmakers, cast and crew. Released to critical acclaim in late 2005, “King Kong” was a worldwide box office hit and, with DVD sales, earned well over $700 million, becoming the fourth-highest grossing movie in Universal Pictures history.

The arrival of the new King Kong experience will follow major enhancements to the Studio Tour. Universal Studios Hollywood will introduce an upgraded Studio Tour experience this summer, transforming its trams into "mobile movie theaters" with state-of-the-art flat-screen high-definition monitors and digital playback systems. The new high-definition monitors will feature commentary from filmmakers, including Steven Spielberg, Ron Howard and Stephen Sommers, along with insight from such personalities as Al Roker, Nancy O’Dell, Billy Bush and Whoopi Goldberg. Clips from numerous movie and television productions, corresponding to sites visited along the Tour route, will add a new dimension to the tour of backlot attractions, sets and facades, capturing how they were transformed for various productions.

Famed film locations on the Universal back lot include the “War of the Worlds” set, Western Streets, European Street, Mexican Street, the Psycho House-Bates Motel, and sets from ABC’s hit series “Desperate Housewives” on Wisteria Lane. Back lot attractions include "Earthquake," "Jaws," "The Fast and the Furious: Tokyo Drift" and "The Curse of the Mummy’s Tomb."

Also this summer, Universal Studios welcomes the "The Tonight Show Starring Conan O'Brien" to a newly constructed soundstage at the studio and will celebrate the re-opening of most of the iconic sets damaged in last year's fire. Studio tours and film production will resume at the world- famous Courthouse Square, Brownstone Street and an enhanced New York Street. Additionally, new film locations will be introduced to meet contemporary film production needs, including a modern urban cityscape, with glass and steel façade structures that will provide film and TV crews with the opportunity to replicate a modern city street scene in a controlled studio environment. The new contemporary cityscape will be the largest modern urban backlot shooting location in Los Angeles.

Universal Studios Hollywood (www.UniversalStudiosHollywood.com) is a unit of Universal Parks & Resorts, a division of NBC Universal, one of the world's leading media and entertainment companies in the development, production, and marketing of entertainment, news, and information to a global audience."

I had hoped that those meetings Peter Jackson had on the lot a while back would result in him coming on board as a consultant on a Lord of the Rings attraction at say, Disney's Hollywood Studios or even an entire land based on that property, but so far it's not materialized. Then again, there is hope. Next year they start filming "The Hobbit" so if the Mouse plays its cards right you never know what could magically appear. And that would also possibly involve Guillermo del Toro as well. Perhaps he could start working on that "The Chronicles of Prydain" project that he's been talking about...
Posted by Honor Hunter at 2:32 AM

I want Kong back.

Glad to see he's coming back to USH.

Jim Hill said on a podcast that Disney had tried to get the rights to "Lord of the Rings" and "The Hobbit" for a new scene on The Great Movie Ride and as part of Beastly Kingdom at DAK. I don't care where they put it, as long as it ends up coming to WDW and other Disney parks.

^He said they wanted to do a movie display exhibit a la Prince Caspian which in turn could have lead to a new scene in TGMR (Beastly Kingdom was blue sky (no pun intended) by that point) but were turned down because apparently the LotR traveling display was popular enough.

Are "The Chronicles of Prydain" set up at Disney?