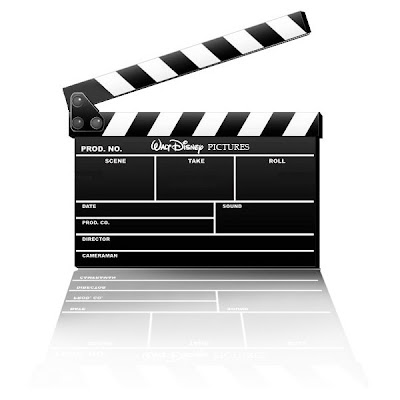 In response to that Tomorrowland story, I figured it was time for this...

With the economy the way it's going, most people are holding off on big purchases like cars and expensive electronics items. But they're going to the movies in record droves because it's easier to pay ten or twelve bucks for movie than $500 for a HD television or $15,000 for a new vehicle. The studios are having a grand year so far... except for Walt Disney Pictures and the studio in general. It's ranking last in almost every category. The last year hasn't been too kind to the Mouse. The choices it's made for the box office haven't bombed so much as they've just underperformed or disappointed. So that begs the question: "What do they have planned for the future?"

Well let's start with the end of summer. Right after those wonderful releases like "G-Force" and in between "Old Dogs" you'll get the new Bruce Willis sci-fi "Surrogates" which could wind up being a hit for Disney. I don't know how Old Dogs will do, but I think G-Force will be a hit just like last year's "Beverly Hills Chihuahua" was. Not my cup of tea, but not everything is.

So then what do they have in store for us in future? What about the road ahead of 2010? What about 2011 and 2012 and maybe beyond? Ok, let's not get too far ahead of ourselves. Well, if you've seen their development slate for the next few years, it can be described in one word.

Action and adventure films seemed to be deep in the pipeline for the next few years and being as I like that kind of film I'm a bit happy about it. Of course, it's going to depend on what these projects turn into. I mean if the scripts are good then that'll be great but casting plays a pivotal role as well. Not to mention that little thing about getting the right director. With that said, here are a list of some of the projects that Dick Cook and Oren Aviv plan on coming to a silver screen near you.

Prince of Persia(2010) - Mike Newell directs this adaption of the popular gaming franchise starring Jake Gyllenhaal as a prince in search of his destiny. Hopefully it'll be good. The script has been rewritten since the draft that I read. Video game adaptions haven't panned out that well yet, maybe Jerry Bruckheimer will make sure this could be the one.

Nemo(2010/2011) - McG will direct this prequel to 20K that he hopes will star Will Smith(please no, please no) as the brooding younger Nemo before he found that island, built that fantastic sub and went on his vengeance streak. Please let fate step in and find someone else for the part. Since the Mouse wants to turn this into a trilogy I don't want to suffer through three adventures in miscasting.

Gemini Man(2011) - Curtis Hanson is attached to direct the script by David Benioff set in the future of an aging hitman that suddenly goes on the run from a younger hitman trying to kill him. The catch is that the other hitman happens to be a clone of himself. Jerry Bruckheimer will make this one of his big 2011 tent poles.

National Treasure 3(2011) - Not confirmed, but definitely wanted by the studio. Nicholas Cage is all up for another adventure. Supposedly the scope of this new tale will involve more international action. Expect a search for the right screenwriter to give the story the proper angle. As usual, Jerry Bruckheimer produces.

Jungle Cruise (2011) - Nothing has been heard about this project in a while. It was given to Alfred Gough and Miles Millar to rewrite Josh Goldstein and John Norville's script last year but nothing has come forward about their draft. The plot would loosely follow the attraction and involve a roguish boat captain piloting his ship down dangerous waters searching for a miraculous cure for... something. Time will tell if the project is stuck in development hell or moving smoothly down the river.

The Lone Ranger(2011) - Mike Newell is in final negotiations to direct this 21st century adaption of the classic radio character. With a script by Terry Rossio and Ted Elliott and Johnny Depp as Tonto this film will be a huge event film for Disney. Now if they will just find who is going to be playing that masked man, all the pieces will have come together.

Tron 2(2011) - Famed commercial director Joseph Kosinski makes his feature film debut directing the sequel to the 80's cult classic. With a script by Lost's Adam Horowitz and Edward Kitsis and original stars Jeff Bridges and Bruce Boxleitner, this will be the Mouse's best chance to rule the summer box office in 2011.

Pirates of the Caribbean 4(2012) - Johnny Depp returns as the lovable pirate in this film minus Will and Elizabeth. No writers or directors have been signed yet, but expect this project to heat up by the end of the year. The only other cast member I hope returns is Geoffrey Rush because he's the perfect foil to Depp's Sparrow.

John Carter of Mars(2012) - Andrew Stanton makes his live-action debut with this big screen adaption of Edgar Rice Burroughs famed Civil War character that fights across the landscape of a distant planet thought to be Mars. This will be Disney's most interesting film of 2012 with many wondering if Pixar's magic will translate into Disney's live-action side.

Swiss Family Robinson(2012) - Not much has been announced lately, but director Jonathan Mostow is supposed to take us on a remake of the Disney classic three years from now. The script by Gregory Poirier and Mostow is supposed to be set in the original time period(good) and will hopefully have the heart and adventure of the first film. Hopefully the film will be more intense like the director's "Breakdown" and less "Terminator 3: Rise of the Machines" which was a whimpering sequel.

And then there are the other projects. Those are the ones that Disney will be distributing for DreamWorks over the next six years. Think Spielberg and company won't have a few big action films in that line up?

It seems a pretty expensive line-up, but since their strategy to make few and relative unexpensive family movie didn't give up to expectation and failed, I think and hope this is a good idea!

talks about the possibility that Disney may shut down Miramax because of growing costs and the Dreamworks deal. Old rumor, denied by Cook, but now someone still believes it.

Well, I'm definetly looking forward to The Lone Ranger, which will be great because Johnny Depp as Tonto is one of the funniest castings ever. I also can't wait for Pirates 4, since I loved all three and certainbly hope Geoffrey Rush and Johnny are only starring this time. Nemo sounds cool also, but keep the original design or modify it and make it bigger and hire Eric Bana instead, he's a cool actoir to play Nemo, just see him in Star Trek. I'd love to see National Treasure 3, they're just so fun with the history stuff, my little brother and I just love it. You forgot to mention The Sorcerer's Apprentice, which sounds interesting, plus the Princess and the Frog and Repunzel in the next few years sounds great and can't wait to see any other 2D animated films.But it would be nice to see something original from Disney, oncerning their live action stuff I mean, something bold, zany, funny, and adventurous.

I still think Disney needs to consider some changes to its marketing department. I just don't feel it has recently done a good job at promoting Disney's films. But maybe I'm the only one who feels that way.

i agree with bob something needs to be done. the only one of those movies that really excites me is pirate 4 (cus i just see them butchering the classic swiss family) and thats because it cant be worse than the last one. im definitely excited for the mouse house has instore in the animated genre.

They could serve up whatever they want. I would go see anything with a short attached to it...