In a galaxy farther away than I wish... 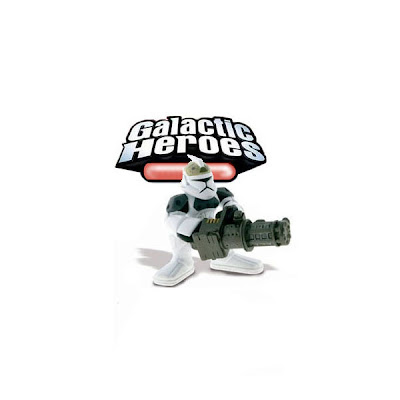 So George Lucas has been secretly planning a new "Star Wars" animated series...

It appears that according to IESB, Lucasfilm is working on an animated (CG of course) series based on the "Star Wars: Galactic Heroes" line of figures. There seems to be an effort to cash in on the young boys that also happen to like Marvel's "The Superhero Squad." I'm not worried about this series, because frankly, it's not aimed at me. Still, it would be nice if Mr. George did something that appealed to his original fan base and not those that have grown up on the mediocrity of the Prequels.

The website jokingly say they give Lucas a couple years before we get an Indiana Jones animated series. I personally welcome this if it turns out to be the series that Paul Dini wants to do.

Oh, and the inside name for the Star Wars kiddie show is "Squishies."

Doesn't surprise me. Lucas is such a whoremonger. I didn't think he could take the Star Wars franchise any lower than he has with Clone Wars but Galactic Heroes permanently kiddifies the once great saga a long time ago...

I like this idea. I have very young children (2, 4 and 7) that like the SuperHero Squad. This is a show that all 3 of my kids can watch and I'm not worried about it's content. My kids REALLY want to watch/consume superhero content, but MOST of it is aimed at much older kids.
My oldest and I have watched EVERY episode of the Clone Wars and it is one of our favorite shows. As with any episodic TV show, some episides are better than others.
Heck even a couple of the Band of Brothers episodes were pretty lame and they had TOP flight talent workng on them!
By making a Galactic Heroes show finally my younger kids can watch Star Wars. They REALLY want to watch the movies and Clone Wars, but I feel that they both are too intense for them right now.

I would love to see more than an updated movie at Disney Hollywood Studios. Hopefully Lucas has more up his sleeve. I am not a real fan of the animated Star Wars movies.