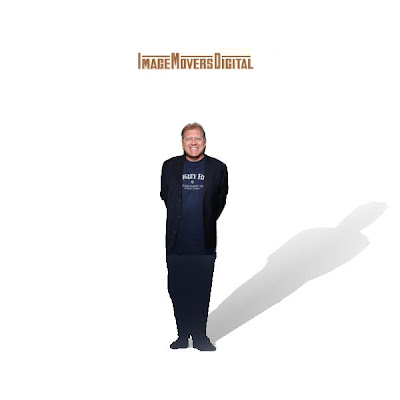 Early in his tenure as the new head of Walt Disney Pictures, Rich Ross flew up to Northern California to visit ImageMovers Digital to see their digs in Marin County...

Now we know he was casing the joint. With all the money it took to create "A Christmas Carol" versus all the money it made, a decision was made to cut the Mouse's losses. That's right, a movie that made over well over three hundred million dollars is a looser in this day and age. As of 2011, Disney is shuttering the facility/production company and its 400+ employees. Sad day for those affected by this action.

BURBANK, Calif. – March 12, 2010 – The Walt Disney Studios and ImageMovers Digital (IMD) today announced that they will close operations at IMD’s Marin County facility after production is completed on Mars Needs Moms. The IMD facility is expected to be closed by January, 2011.

“Bob and the entire IMD team successfully built a state of the art studio and produced an amazing film, A Christmas Carol, at a time when the dynamics of the industry are rapidly changing,” said Alan Bergman, President of The Walt Disney Studios. “But, given today’s economic realities, we need to find alternative ways to bring creative content to audiences and IMD no longer fits into our business model.”

“I’m incredibly proud of the talented team that we assembled at IMD and the fantastic work they have accomplished,” said Robert Zemeckis, one of the co-founders of ImageMovers Digital. “Their pride and dedication to making quality movies is evident in everything we have produced.”

The Studio is hoping to create a new long-term production deal with Zemeckis and his IMD partners, Jack Rapke and Steve Starkey, which will include the continued development of the Yellow Submarine project.

Quite a bit different that what Bergman said just a couple years ago with the creation of IMD:

"We're really excited about this new performance-capture company," said Alan Bergman, president of Walt Disney Studios. "We think it's going to play a huge role in making film going forward. We want to be at the cutting edge of this technology."

Amazing how a couple years, one film and mediocre box office can change one's perspective, eh?

I'm not a huge fan of the hyper-realistic MoCap that Zemeckis has used or more particularly, the stories he's chosen to make, but I am a fan of Bob Zemeckis. He's produced some truly wonderful films in my childhood through the end of my college years as a star quarterback for, wait. Sorry, dreaming there for a moment. But many of Mr. Zemeckis' films have littered the shadowy corners of my brain and I thank him for it. I do wish he'd join the world of the living though and stop making films in a warehouse with guys wearing ping pong balls on their outfits.

Perhaps he'll now make a Roger Rabbit sequel that has actual actors in it. No final word yet on what will become of "Yellow Submarine," but the deal could be a stopgap measure to ensure he continues working for Disney. It's hoped that something along those lines will keep the animators busy for a couple more years. And maybe the director can put some other exciting ideas he has into development.

Kind of unfortunate that it only took one film to carry out the destiny and the future of the studio.

What happens if "Mars Needs Moms" is a hit in the box office? I'm getting a "Monster House" vibe from that project.

Sad for those employees. Hopefully they will find other work.

I'm not a fan of motion capture either.

Honor--
I have a question; I have been following your blog for a long time, and yes, I know that in the past you have mentioned that in Hollywood story is king, but money is God, but surely critical praise (or lack thereof) is taken into consideration as well, right?
After all, a film also has to have respect to be considered a success, doesn't it?

One good decision for the Disney Channel Savior!

Really happy with that, I hope the Mo-Capping disappears from the WDCompany for good in the coming years!

This could turn out to be a good thing for Zemeckis. I agree that he had a lot of potential once, but this IMD thing was a bad idea. I too would like to see him go back to making movies with real people in them.

good. now we can finally get that back to the future 4 we've all been waiting for.

how about a sequel to Contact? I always felt we needed to revisit this masterpiece of film.

Let's hope there's no roger rabbit 2. The first one was bad enough. If they DO make it, let's hope they use their in house animators instead of farming it out. The animation in roger rabbit looks like wobbling water baloons, and looks badly airbrushed and grey. The crappy animation isn't the central problem with the film, though. The problem is THERE IS NO STORY. And what little sense it makes is tiresome and boring.

It's all about budget vs. potential return. IMD's budgets were just too high requiring a monster hit every time out the gate.

It does make one wonder, though, what kind of scrutiny this Ross fellow is giving Pixar. It's Hollywood, after all, and no one is immune from political mechinations. Ross is known for being quite petty. His jealous tendencies has rubbed many people the wrong way. If projects aren't his, he kills them. You'll not hear a word about Dick Cook having green lit Alice in Wonderland or the Tron reboot.

The results of Zemeckis motion capture (thus far) aside, I think this is going to prove to be a premature move. But, in a time of cost-cutting and belt-tightening, I suppose somebody had to go. And I'd prefer the mo-cap people get the boot at Disney, compared to the traditional animators.

Sucks for Zemeckis and his people, though. The film did well enough, and they still got the sack. Kind of a raw deal, really.

Zemeckis is a great director, but I've avoided all his mo-cap films. We're not there yet, and he can't escape the uncanny valley no matter how hard he tries. The footage from Final Fantasy XIII looks better than anything Zemeckis does because they aren't trying to imitate people. It's an artistic representation of people, like in The Incredibles, and that remains far more acceptable to audiences than Zemeckis' zombies.

Hmm. What's the big deal? Disney changed their mind about Digital animation. There's nothing new to this along with Dick Cook's departure.

It does make one wonder, though, what kind of scrutiny this Ross fellow is giving Pixar.

I wouldn't worry too much about Pixar or about Walt Disney Animation Studios. Those two are completely under John Lassetter's control.

Personally, I'd prefer that Disney wouldn't jump into these acquisitions that attempt to tap other's creative success. When they buy a company in an attempt to merge and blend someone else's applications into their own, it has often resulted in weakening both.

Too often those moves have resulted in poor Disney results and the destruction of the company they bought in the first place.

"I wouldn't worry too much about Pixar or about Walt Disney Animation Studios. Those two are completely under John Lassetter's control."

Seriously-don't be so sure about that. Hollywood changes. Fast.

"The crappy animation isn't the central problem with the film, though. The problem is THERE IS NO STORY."

In an alternate version of 1940's Hollywood, where cartoon characters coexist with humans, a private eye is hired to solve the murder of a producer. His search uncovers a conspiracy to dismantle LA's public transit system to make room for a network of freeways. The PI battles his own prejudice and alcoholism to unmask the corrupt public official behind the scheme, and save the 'toons neighborhood from demolition.

**Personally, I'd prefer that Disney wouldn't jump into these acquisitions that attempt to tap other's creative success. When they buy a company in an attempt to merge and blend someone else's applications into their own, it has often resulted in weakening both.**

Precisely why the Marvel and especially Muppet buys were so completely asinine. Plus Disney's hired a director of R-rated comedies, in one of which he exposed his um "valuables" on-screen, to direct and star in the Muppets movie. What is going on up at Disney these days? Aren't they aware that Jason Segal's prior films will definitely come up when the movie's being promoted? How are families going to react to it? They are nuts up at the Mouse House these days, completely nuts.

Too bad it's not in the film as clearly. It's a really rotten film, with poor storytelling, and even worse animation.

#2) Stop annoying us all with your slams against the Muppet and Marvel acquisitions! Doing so gets you NOWHERE!

#3) Who cares if Hollywood changes fast or whatever! Lassetter is still in charge of Pixar and WDAS and has complete creative control over both of those studios, so STOP WORRYING!

Man, a lot of you really know how to be pain-in-the-patookies!

To the above Anonymous: you don't like it here, LEAVE.

Roger Rabbit does not have a "great story." nor is it well told. And it is ugly. Fact.

^^^^
And what are your qualifications to make that statement?

It's obvious that, in your opinion, you don't care for the story. But you can't claim it's anything more than that!

Roger Rabbit does not have a "great story." nor is it well told. And it is ugly. Fact.

NO! Not fact. Opinion only!