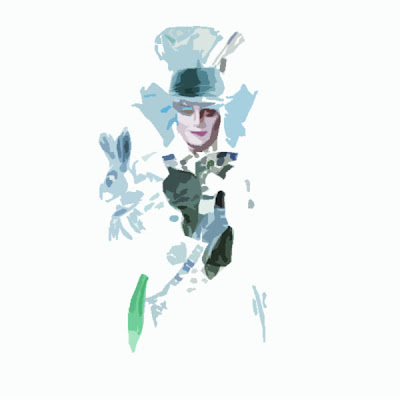 Walt Disney Pictures' "Alice in Wonderland" is a huge hit having already taken in half a billion dollars worldwide, but if it was up to the Suits, the movie never would have been what wound up on screen...

When the macabre wunderkind film maker first had talks with Disney Suits there were serious discussions as to what medium he would do it in. The intention of Burton had been to make the film a hybrid of live-action and motion-capture, similar to what wound up on the screen. But the brass at Disney wanted it to be entirely motion-capture, like its other studio ImageMovers Digital. This was the creative and budgetary route the Suits felt was best.

Burton's early discussions with them were in objection to this, but it wasn't until he convinced them that a certain actor wouldn't be up for it. Johnny Depp, who loves to play bizarre and eclectic characters wouldn't go for wearing black suits with ping pong balls on them. It's not something Johnny likens to and would have dampened his enthusiasm for playing the part in Burton's sequel. And with Johnny considerable weight (power-wise I mean), the Disney heads backed down. Burton told them as much in a meeting that if Johnny had to wear those outfits and walk around a blank room he'd pretty much turn down the role. With Johnny Depp's huge star power and commitment to "On Strange Tides," what he wants is very much catered to at the Mouse House. Whether it's the tone/direction of a film or simply just a food order from his favorite restaurant at the Disneyland Resort sent up to his hotel suite (which happens to be in DCA, btw).

Johnny's come a long way from almost being fired off of Pirates...
Posted by Honor Hunter at 12:01 AM

I'm wondering if that was a good bluff, as I think Depp did do motion capture for Pirates 3, when he was the imaginary Sparrow that had become part of the Dutchman, going "where's my brain".

Doesn't mean Depp liked it, and maybe he made it clear behind the scenes that he wouldn't do it again for any other character besides Sparrow.

I'm glad that things turned out the way they did. I'm pretty sick of motion capture.

That Mr. Depp is a great guy.

We're all glad that they stuck their guns, Burton's Alice turned out great, and it's a hit as well, so there's a lesson there for the non-creatives I'm sure.

So, are we talking about Monte Cristo sandwiches being delivered to the Grand Californian?

What was the food order I wonder?

"So, are we talking about Monte Cristo sandwiches being delivered to the Grand Californian?"

No, Johnny's taste isn't so grand. Sorry, that wasn't meant to be a pun. But his favorite place to eat is the Taste Pilot's Grill and his favorite food is the chili burger. He has it every time he goes there. Either in his room or at the park.

Despite owning an island, Depp's taste are very blue collar.

...Me again, I still think that Mr. Depp is a great guy, but I have something else to add...

Given Johnny's fondness of DCA, I hope that Disney will be sure to dump tons of cash into the park in the coming years!

Not only am I looking forward to phase 1 being finished, but I really want phase 2 to happen!

I'm still hoping for that Bolt attraction that Honor hinted at some years ago.
Those were great characters, and I'd love to see them used again.

I'd say the likelihood of a "Bolt" attraction are about as likely as an "Atlantis" attraction...

But who knows. Things could always change. If the subs, Lincoln, the castle-walk through, and Captain EO came back, then I'd say anything is possible.

Bolt was still more popular than Atlantis...and a better film.

At the very least, someday I'd still like to see a Bolt sequel or a new short!

Hey Honor, any mumblings of them putting Burton's Alice in the Parks, either as an attraction or walkarounds characters? With the box office it's doing, I'd be surprised if they weren't at least talking about it.

Hunter, why the HELL don't the parks have a Mary Poppins attraction? That was one of the most successful Disney films of all time! And what happened to the rumored Seven Dwarfs Mine Ride?

Alice is terrible. But I'm glad for Disney it's a hit. They needed one.

But to say "This was the creative and budgetary route the Suits felt was best" is hard to believe, as motion capture is as expensive, and more often more expensive, than a traditionally shot film with visual effects added. The mix certainly suits the Burton mold better.

Personally, I thought the film was unimaginative, ugly, and disjointed. The worst of Burton and masturbatory visual effects artists combined.