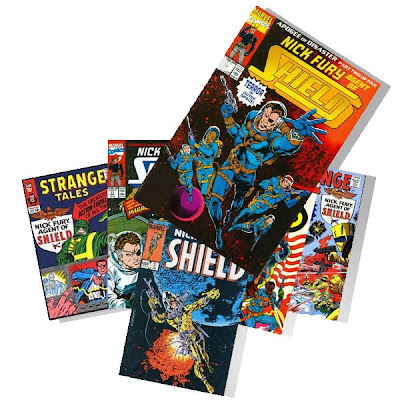 Remember how we mentioned that now that the Mouse owns Marvel, the powers that be have combed over the vast catalog of characters for stories to exploit...

There are several properties that have been approved (like XD's Avengers program and one other yet to be announced one) and many more that are in the concept and proposal phase. But one of the proposals for a film and possible television series could be an exciting project as well.

After Paramount's deal with Marvel expires in 2012/13 the films that are released will come under Disney's moniker or it's Touchstone label. Several of the actors who have signed for roles have also signed agreements that could extend their characters/parts up to nine different appearances. Those appearances will almost definitely appear in films under Disney. Samuel L. Jackson is under one such an agreement as the Ultimates inspired, Nick Fury. No time table has been set as to when a Shield film would happen as it's in the early stages, or if Fury would play a major part, but the plans are going forward.

This being Hollywood, it doesn't mean it's a sure thing or if it will be one of the first films out of Disney's gate, but rest assured that Suits in Burbank are excited by the prospects of taking the secret organization and turning into an exploitable franchise set amongst multiple platforms (film, television, Internet, books, clothes, costumes, toys, gadgets, ect.). But think of this as of model of what Disney wants to do. Imagine this being the Mouse's version of what G.I. Joe could have been. Many see this as a possible franchise for massive profits to add to those Disney Vaults. Now saying that Fury would be in it is a given, but as I've said, it's still in an embryonic state and the talks as of now are about the agency itself. That way, once Jackson/Fury are long gone, the organization would go on. So other Marvel characters from Shield as well new ones created for films/series would be used.

In a never ending quest for that male demographic that has eluded Disney, this project could turn into the Holy Grail...
Posted by Honor Hunter at 12:16 AM

I hope they stick to the traditional Nick Fury and not the Ultimates version i.e. Samuel L. Jackson. I just don't buy Mace Windu with an eyepatch.

in the end a good movie is a good movie. these properties are worth nothing if you can't turn them into a GOOD MOVIE.

This. Would. Be. Awesome.

OMG! This would be awesome!

The comment about this being what G.I. Joe could have been is especially ironic given that G.I. Joe conceptually started as a (Nick) Fury Force pitch.

I would also like to see Disney/Marvel exploit the old Ultraverse characters. Malibu did to some extent before Marvel bought them with a cartoon series and the long running NightMan TV series.

Wow, I just found this. I can't believe some sites are quoting other sources when this was out months before.

I really want that SHIELD animated series to happen!