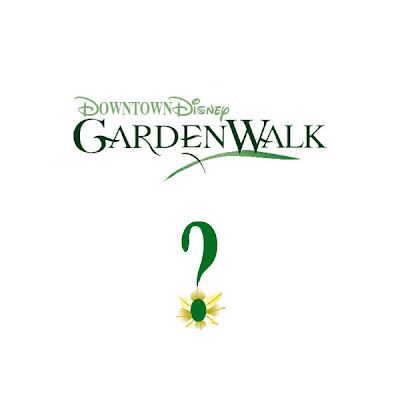 This isn't a rumor, but more about speculation of an opportunity...

The Anaheim GardenWalk will be up for sale on today because the developer couldn't meet the payments. One has to wonder what Disney thinks of this. After all, this a chance for them to control a piece of property that could prove valuable years from now when that Third Gate opens up. Would the Mouse let the opportunity pass by and let some other bidder come in and take it? What if the new owner were hostile to them and their plans? Wouldn't it be a safer bet, especially during this suppressed economy to take hold of that valuable plot of land?

Now, as I've said, I have no inside knowledge on this. I simply think it's a moment that the Walt Disney Company has to plan for the future. When they do someday build another park, there are going to be people streaming in and out of all day long, all year long. Those people/guest are going to tired and hungry. Wouldn't Disney like to be the ones that makes the money from them obviously going across the street and having a bite to eat, a movie to see or a bed to sleep in?

Perhaps turning it into a Downtown Disney East with the original being a Downtown Disney West. Call it the Downtown Disney GardenWalk. This actually falls into theming with the original as it's supposed to be a garden. Did you know that? With all those waterfalls, trees and flower fountain most don't realize it but that's the theme for the outdoor shopping area of the Disneyland Resort. They could put Imagineers to work on "Disneyfying" the place, making it more friendly and accessible. Most of all, they can make it more of a garden, which is one of the things I think it's lacking in. Strangely. Where is all that foliage you see in the concept art?

But I can't imagine that Bob Iger and company haven't at least thought of this. Will there ever be a time in the next couple of decades where it would be possible to purchase this land for the devalued amount it would cost in this recession? I speculate this as a possibility, but I wonder if Iger has had talks with the new head of Disney Parks Tom Staggs about this matter. He does seem to have a vision to see the opportunity of moments like this. For a fraction of what Bob paid for the Marvel acquisition he can get some desired breathing space for that new park that will someday bare his fingerprints. And if what I think will be built there does happen, he'd be very smart to be bold here.

And it would be the exclamation on his purchase of Mighty Marvel...
Posted by Honor Hunter at 12:08 AM

From my visit, I don't know how Disney can integrate it into Downtown Disney. GardenWalk is very far from the Disneyland entrance. Calling it Downtown Disney East will only confuse the patrons.

The only way to for it to work is build Disney hotels on the property and have a direct connection to the 3rd park, if it is across the street on Katella Blvd. Call it Disney's GardenWalk Plaza.

The whole mall is poorly designed; which means Disney will have a hard time profiting from it. Disney might need to completely renovate it and turn it into something else. This will take decades.

I also don't like the fact that the parking lot is closer to Harbor Blvd than the stores. This means the stores are cut off from the passenger traffic coming from the parks and convention center. Visitors have to walk a longer distance, which is bad for business. Obviously, new fronts and signs should be designed to cover the parking lot structure so visitors can see there is a mall inside.

I agree COMPLETELY and had the same thoughts.
Does anyone have any insider info on this?
ESPECIALLY since Disneyland already uses Gardenwalk's parking garages as overflow parking.

They could also bulldoze it and use it for parking, leaving more breathing room at places where parking currently stands.

Downtown Disney can barley fill the stores it has now, I doubt it will be able to handle another full sized mall.

Lord of the Underworld said...

Am I right to understand this is across the road from Disneyland?
Next to another plot of land Disney owns and would in years and years to come wish to develop on?

But sounds a reasonable idea

"The whole mall is poorly designed..."

In this case Disney would be buying the lot, not the Mall. I agree with Honor, its too good a deal for them to pass up.

Disney should absolutely buy this property. Would DEFINITELY be of use in the future to expand the resort. I really hope they do purchase it.

If I were Disney and I would get rid of the mall theme and make it more of a club/restaurant scene like Pleasure Island was back in the day.

Locals would for sure visit if this was available.

"In this case Disney would be buying the lot, not the Mall."

Huh? The Mall is for sale, not the Lot. If Disney didn't own the Mall, it could not make changes to it. I'm not sure if the Mall includes the Lot, but it hardly matters since typically there is a separate agreement to lease the land in those situations.

"I agree with Honor, its too good a deal for them to pass up."

Huh? It's a money losing deal. The Mall doesn't make any money, which is why it is in foreclosure. The new owner has to inject tons of money to make it work.

Surely Disney can afford to invest in GardenWalk, but Disney has always dragged its feet on these matters. I don't think they have the patience to own a money-losing Mall unlike owning an empty strawberry field. Any possible potential is years away, maybe a decade, to realize.

When I visited Anaheim in October of 2008, I stayed at the Holiday Inn Express right by GardenWalk. Downtown Disney was busy the whole week I visited (pretty impressive because it was the off-season) but GardenWalk was dead, except for a couple of the restaurants. I do think the Disney name would work wonders for this shopping area.

I think Disney should buy the property, its VITAL to the resort gate if they want to have a decent 3rd gate.

The GardenWalk is VITAL to the resort if they want to have a decent 3rd gate. I think they should buy it.

Disney has the opportunity now to buy that place, which looks like a ghost town but is a really beautiful place. The place is or was had plans to build a hotel tower.

If Disney bought the place, they can build a hotel resort out of the place and not worry about loss in revenue if they still want to knock down the original Disneyland Hotel and have a huge make over but since they approved the some-what renovation...

I think it would be foolish of Disney not to give serious consideration to this purchase. The mall sits between the future site of the second parking deck and the Strawberry Fields. This would mean Disney could provide direct access between the second deck, the third park and the existing resort area.

For the time being, it could be wise to keep the Disney name off of the mall.


I hope with the vacancies at both Downtown Disneys that the company is starting realize that just being Disney is not enough to justify whatever they are asking for in rent.

the land is more important than whatevers on it now. this would be an essential buy

"Huh? The Mall is for sale, not the Lot. .... I don't think they have the patience to own a money-losing Mall unlike owning an empty strawberry field. Any possible potential is years away, maybe a decade, to realize."

Others have already pointed this out, but since you quoted me I'll just say...

Huh? Is the Mall floating in the air or is it sitting ontop of something called LAND? Close the failing mall. Bulldoze the thing than sit on the empty lot until the economy pickes up. Seriously not a new concept.

Katy: So Disney should spend $200 million and assume other possible debts and construction liens for the lot/land? The "land" isn't worth that much. The "mall" is more valuable as developed land even if it is losing money. Again, should Disney overpay for this and keep it on mothballs until it figures out how to monetize it?

Besides, bulldozing it doesn't make sense either. Why spend tons of money to flatten it? Dirt is worth nothing.

See the story on Las Vegas' Frontier Hotel. The owners bulldozed it to build a hotel and later reneged when the economy went south. There is no more hotel. There's just an empty lot across the street from the Wynn/Encore Resort. $3 Billion down the drain. (Yes they overpaid.) It would be worth something if it still exists and open for business.

Disney will have less options when the mall is destroyed for no reason. Disney could still resell it if they change their minds.

Do you want Disney to maintain a money-losing mall until it figures out what to do with it? The 3rd park is still a decade or more away.

I Agree with Honor, it makes lots of sense for Disney to try and purchase this property.

The mall has an already built in parking structure along with the infrustructure for a possible second DVC. The parking garade was built so that timeshares could be built over it. Perfect for that second Disney vacation club suites. The mall fits right in the middle of both of Disney's major properties and will be right across the street from Disney's second parking structure.
It would be the perfect place for a downtown Disney east that would connect Disneyland/DCA and the third gate.

Disney has had no problems keeping the original downtown Disney filled and the only reason they lost some stores were because the economy destroyed them across the country.

destroying the mall makes no sense, There are plans to start building two hotels by next year and it has been said that Disney has signed up to run them. All those added rooms will eventually help increase foottraffic for the mall.

The mall has issues because it has not been run well. It would be much more valuable to just invest in it a bit and fix the problems it has. Disney could re-invent the mall by adding signature menues like at other Downtown Disney's. Espn zone is always busy an i think the area could easily support a second one and they could consider bringing in Circus d soliel just like they did in WDW and Tokyo.