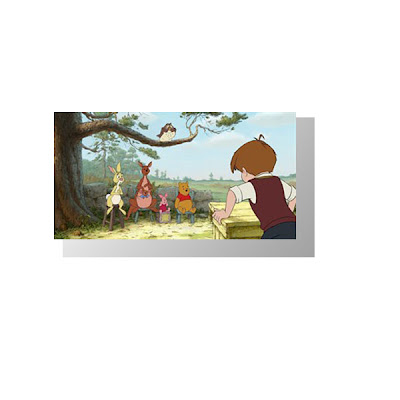 Next year sees the release of another hand drawn animated film about a famous bear from the Mouse...

"Winnie the Pooh" will be Walt Disney Animation Studios' 51st animated feature and will be the company's last one to feature the safe style and look that some have complained about (princesses and classic, often used characters). Then comes the lull of 2012, after which we'll get some rather interesting changes in direction away from the creatures from the Hundred Acre Woods.

Not that this film will be bad. In fact, from the few sources I've talked to, this film is turning into a sweet, little gem. The story has been worked out rather well by Burny Mattinson and the directors and they've been in the process of finely tuning this very moderately priced picture (less than a third of the cost of TPATF). This film, even if it makes half of what that film made will be quite profitable. Now, if they can just make it past Harry Potter.

I hear that is what Tiggers do best...
Posted by Honor Hunter at 9:19 AM

I still can't believe Disney chose the weekend of Harry Potter to release Winnie the Pooh. Seriously, that is probably the absolute worst weekend for them to release the film. Actually makes me think Disney does want WDAS or traditional animation to fail for some reason.

Well... when it comes to kid tickets, "Winnie the Pooh" will win flat out. Overall... LOOOOOOOSEEEERRRRR!

I'm glad that this will supposedly be the last film featuring "the safe style and look that some have complained about." I'd be one of those people to complain.

While I've never been a fan of Pooh (I know, I'm a commie) I am glad to hear about the hand drawn animation. But releasing it the same weekend as Harry Potter? Wow, suicide, I say. Of course, I had no intention of seeing the Pooh movie, I'll be eating my popcord watching Harry!

Well I will see both! Daughter won't go see HP but she will go see Pooh! Totally different demographics here. Why can't people see two movies in one weekend? I can't wait!!!

I agree, it's a HORRIBLE release date. Not only the competition like Potter, but also getting released only 3 weeks after "Cars 2" as well. This is not a summer movie. Honor, your post makes me think that Disney doesn't even expect this to make any money. So why they heck did they make it?

Disney has no family movies currently scheduled for Thanksgiving 2011, and the Muppet movie doesn't come out until Christmas day. They should bump Pooh to Thanksgiving, no question about it. To be fair, there's alot of competition for the family audience in November, but it makes no sense that Disney should just surrender and Pooh seems like a better fit for the holiday season.

Yeah, the July 15 date is suicide.

But there's something else to worry about besides Cars 2, which I forgot about. One week after Cars 2, Transformers 3 comes out. (Yay!) That's another thing that oughta destroy Pooh. I guess Disney is wanting to give themselves a real run for their money... but they should realize that when it comes to Harry Potter (yes I'll be seeing that), they're not gonna make it.

Yeah... but it'll probably already have been affected by Transformers 3...

Yes, because high schoolers and young people are planning to go to Pooh's midnight showing..

Seriously, I'm betting that Pooh is being aimed for the "Disney Junior" crowd, it's going to do decent. It's a known brand and parents will most likely bring their preschool children to this film. Transformers and Pooh are polar opposites.

Disney is (I assume) betting on the last Harry Potter being too scary and mature for the younger kids... and in turn the parents will take them to see Pooh. But, while that seems like it could work (HP7 will be very dark)... releasing it so close to Cars is stupid. Parents are more likely to take their kids back to see Cars instead of an unknown variable being Pooh.

I hope this film was made on the cheap and is a hit with critics.

"Yes, because high schoolers and young people are planning to go to Pooh's midnight showing."

Okay, first off... I'd be surprised if there was even a midnight showing for Pooh. Second off, while young people will be seeing Pooh ASAP, the high schoolers will be far more interested in TF 3, I'm certain.

Have a sense of humor dude.