Something Incredible Happened Six Years Ago... 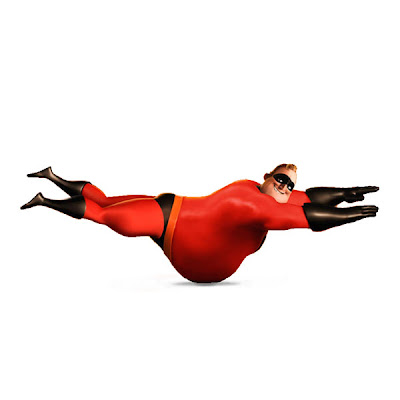 Six years ago today, Pixar's "The Incredibles" opened across America...

This is still my favorite film from the Lamp and my second favorite film from Brad Bird. Many people have expressed disappointment in the fact that all the sequels to their hit films have not included this one. That's because, until Bird has a story he deems worthy of making a sequel, or he passes the director's hat to another, there won't be another adventure of this wonderful family. That doesn't mean it won't happen, it just won't happen anytime soon.

Either way, this film and its creator are still incredible to me...
Posted by Honor Hunter at 12:00 AM

Bird's best movie is The Incredibles, what could you like more Hunter?

Anonymous - Bird's only non-Pixar film is "The Iron Giant" so I'm guessing that's Honor's favorite. I just can't believe that they are cranking out an entirely unnecessary sequel to "Monsters, Inc." but can't figure out an angle for another "Incredibles". And yet Bird wants me to believe that Mission: Impossible 4 is a better use of his time.

I don't know why he's dealing with M.I. IV... maybe he disliked the first two sequels and thinks he's got the perfect idea now. (I disagree: I think M.I.III is really good.)

I think our best hope to see a sequel soon is to have Bird hand over the director's hat to someone else. That's what Pete Docter is doing for Monsters Inc 2. And that's what Lasseter did for TS3. And that was also the original plan with Cars 2.

I'm as excited as everyone else to see a sequel, though. The Incredibles is one of my favorite Pixar movies.

Well, I think he's doing M:I4 because "1906" basically got shelved due to budget concerns and he needs to prove his chops in live-action. And I can only assume he liked M:I3 just fine since J.J. Abrams is still producing #4 and came up with the story for it. Still, I find the M:I franchise to be redundant to The Incredibles. But you are exactly right, he should help come up with a story idea for and Incredibles sequel and then hand it off to one of Pixar's up and comers.

If 1906 is shelved like you claim it is (although it would just be due to the enormous budget in my opinion), I guess Bird has to find something to do since he doesn't have a full story idea for Incredibles 2. An old 2007 article had him saying, "I have some ideas that I think are good, but I don't have them all together."

Basically, like "1906" possibly, Incredibles 2 is just a movie that is being stalled.

It all comes down to the suits not having enough faith in a director that has never done a live-action film. So rather then 1906, a massively large production and a big risk for the studio to take on a virgin director.

They test his abilities on MI.4. If he passes and it does really well then we'll see the completion of 1906. If it bombs then the studio can pass the project on to more capable hands.

The Comics have been doing a fantastic job of giving the family new adventures. Even incorporated Xerek, the villain of the early scripts as the main antagonist