Time is flying by soooooooo fast... 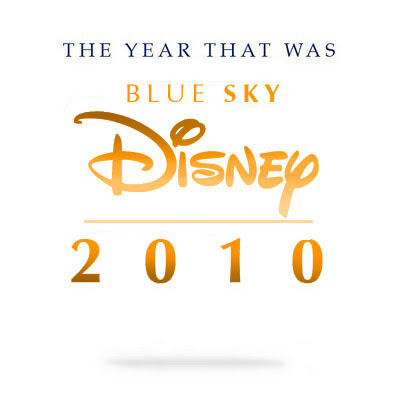 And we continue our look back at events/news that happened from a Blue Sky perspective...

Remember that early in 2010 Walt Disney Pictures high on the "Tron Legacy" film as a future tent pole for the various sectors of the company's entertainment divisions. While the question as to whether or not it'll lead to TR3N or the continuation of the "Tron Uprising" animated series is still out, back in the spring, the cross pollination was running high in the corridors of Burbank.

In April we reported that "Pirates of the Caribbean: On Stranger Tides" was going to be shot in 3D, partially at least. Given all the aspects of filming in versus conversion, Rob Marshall and the Mouse took a middle road.

I love architecture and the design that Disney puts into something to reflect a period is very important. A great textbook example of how to not follow this long held belief has been on display in DCA.

The Lamp through the Mouse finally made it official that "Monsters Inc. 2" was happening.

With that, many were wondering if Pixar had finally sold out with all of the sequels that have been announced since the acquisition into Disney.

Walt Disney Theme Parks still rule the market, despite growing competition with increasing quality, the Mouse dominates the world... at least when you factor in how many people visit them.

Not all changes are as dramatic as what is happening with Buena Vista Street, Cars Land and Mermaid in DCA. Some projects like the retheming of Grizzly River Run to a 50's era national park happen in small increments over many years.

More news from inside WDAS involving the slate of projects planned for 2013 and beyond.

We've done a lot of stories on Tokyo DisneySEA here and I wanted to compile a post where you could have access to all/most of them. Also, there are several links to other websites that have great info/pics as well.

Marvel already has a film division so it was only a matter of time before it developed a television division. Obvious, right?

With all the comic book craziness going on, Disney's rival to Marvel: DC Comics is moving ahead with their men-in-tights adaptations. Here are some of the properties that the Warner Suits may be putting on the front burner over the next few years.

With World of Color we finally started to see dramatic changes over at the Disneyland Resort's Second Gate. Here was Blue Sky's take on the matter.

And the park isn't the only thing getting a makeover at the resort. The Disneyland Hotel is in the process of a renovation. And when that's done there is still another addition that they could add.

With the growing global competition across the world, Walt Disney Parks and Resorts faces many challenges. One problem is there simply hasn't been enough work for those Imagineers that design some of these wonderfully immersive experiences. When that happens people get let go. Those people get hired by competitors and then they create things like this.

The Walt Disney Animation Studios was in a bit of a free fall over the last year as it tried to find it's identity. The success, or lack thereof of "The Princess and the Frog" gave many a feeling that the studio had lost its place. But Lasseter and company still have plans and we had a post discussing what some of those were.

I don't review films anymore, so here's my non-review review of "Toy Story 3" for those that missed it.

Comic-Con is always good for some nice surprises and this year was no exception for the Mouse. Along with all the "Tron Legacy" frenzy there was the announcement that there was another "Haunted Mansion" film coming out in a few years. This one was supposed to actually be good though.

Deadline Hollywood had a great "Geeks' Wish List" that I thought was rather interesting.

Slowly we started to see the kind of projects that Rich Ross was approving and I was not as horrified as I expected to be.

With each passing month we got a more fleshed out perspective of where Disney Animation was headed after 2012.

And that takes us up past the summer with some of what we did here at Blue Sky in 2010. Hard to believe how quick a year goes by, isn't it?

Stay tuned for the fall and everything after...
Posted by Honor Hunter at 10:59 AM

Well, Tron Legacy has turned out to be a bit of a disappointment, critically and financially. Tangled's doing okay - it's done enough box office and garnered enough praise to hopefully save WDAS AND allow it to tackle better projects (Snow Queen, hopefully). But 2010 was certainly an up-and-down year for the Mouse House. More misses than hits, overall, but at least the hits were big ones (Alice, Toy Story 3). This year...well, Pirates will certainly draw viewers in (thank you, Johnny Depp), but Pooh is iffy (looks like the same old stuff. It's PatF all over again. Going 2D shouldn't mean rehashing everything retro). The Muppets...forget it. That movie's release date got moved from Christmas, when it would have gotten killed by Tintin, to Thanksgiving, where it'll get killed by the Chipmunks and Arthur Christmas (looking forward to that one). Looks like Disney's already writing off that one.

IMO, the best thing Disney put out last year was Epic Mickey. Great game, great story, great revival of the company's signature character AND a great comeback for a long-lost character which is finally home again (Oswald the Lucky Rabbit). But will we see a movie, or a show, spun off of it? Don't hold your breath.

Let us not forget Cars 2... that will be another great 2011 movie that has Disney's involvement. Mars Needs Moms looks stupid, despite seeming funny. And then there's National Treasure 3... the second wasn't very good, but I'm willing to give them another shot at it.

POTC 4 could actually be my most anticipated film of 2011 *period,* if not Cars 2. Johnny Depp has to be one of the greatest actors of all time. Not only is his acting fabulous, he has another great trait I love: he stays completely in character even when he messes up in bloopers. ("You can't curse in a Disney film mate. See? I told him." ROFL)

Johnny Depp rocks, and so does Geoffrey Rush... I'm glad he's returning. (He also stays in character when he messes up... "DO SOMETHING ELSE!") Also, I'm looking forward to seeing Ian McShane and Penelope Cruz in this movie. Hopefully it'll be great and not fail.

Anyone else notice that 2011 is going to be a big year for sequels?

Tron just hit $170 million worldwide. I hardly call that a disappointment. They will no doubt officially announce Tron 3 soon. I'm sure Honor will post it when they do.

240.0 million is still chicken feed when it comes to Tron. It's never attracted an audience beyond the geeks, despite Disney's best efforts to attract average Joes and women. And it's been weak overseas. Definitely a disappointment.

Actually, it's not doing weakly overseas, I don't know where you get that from. Even negative Nikki Finke has mentioned that it's going to make as much if not more overseas than domestic. It's down only 26% from last week internationally and that is impressive. It also has only opened up on 70% of the screens. It's not as big a hit as they would have liked but that doesn't mean it's not a hit. It's also had remarkable staying power, averaging about 6.5 million a day during the week and has stayed steady in the third slot.

I know there are a lot of Tron fans that are going to see it no matter what, but there seems to be a lot of negativity out there from people happily wanting it to fail. I don't agree with either, but I am not one who's going to talk about how horrible it's doing.