One plus one is two, except when it isn't... 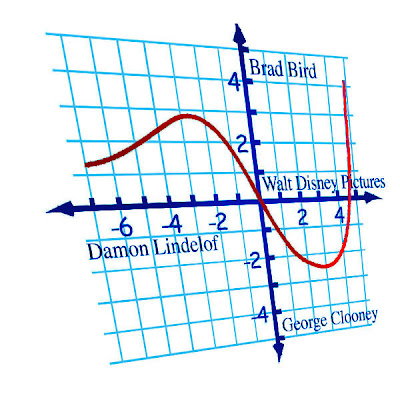 The times are hard for everyone...

But when someone like Brad Bird hasn't gotten the green light yet for his new project, you know that people are saving their nickles.  Suits I'm talking about.  And I can't say I blame them with all the problems in the economy, and politicians that don't know a thing about how it (business) works trying to tell them how to run their business.  But it goes to show you how difficult it is to make a film these days unless it involves a safe property; a known brand, superhero, or best selling novel.  Suits want sure things with all the money they put up.  Only, we know there is no such thing as a sure thing.

Damon Lindelof is one of the biggest writers in the film/television business.  Brad Bird is one of the most successful film directors currently working.  We found out months ago that they were working on a secret project at Disney known as "1952," which the Suits were very excited about.  It was based on an idea from Lindelof, and, we thought, his script.  Now, we find out that he and Bird are co-writing the script.  Together they're trying to tie down a budget and get a worthy star (George Clooney) that will ensure the heads of the studio that this project will get the green light.

I have no doubt that when this all comes together we'll see the script move into a position where pre-production starts.  But the long process that film makers like this go through to get the Mouse to say "yes" is statement of the times we live in.  Should everything go swimmingly, this film should get going around the middle of next year.  That means we could see this new Brad Bird film during the holidays of 2014, or if production takes longer, spring 2015.  If that happens, that year is going to be a monster; there are already so many films being released that year.  Boggles the mind a bit.  If you'd like to know more, the guys over at Collider have a great interview with Lindelof that I'm sure will be of interest to you even in this grim economy.

But on the bright side, a new Brad Bird film starting is a great thing...
Posted by Honor Hunter at 12:27 PM