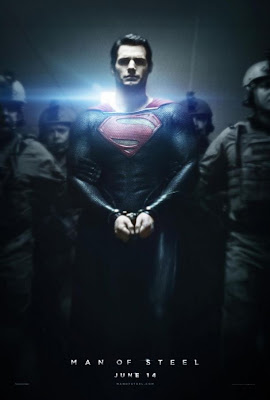 So we finally have our first real look at the Last Son of Krypton...

And it's a very lovely look.  A dreamy, hyper-realistic look and feel of an American icon that many have thought was too old fashioned, too  corner and too dated.

If the film lives up to this trailer then those critics will be eating a lot of crow.  I hope they end up eating copious amounts of the bird.  My only real complaint is when Jonathan Kent talks about the act that Clark did.  He wouldn't say that.  He would be instilling values on his adopted son to do the right thing regardless of the consequences.  He would be the focal point of the young Superman's values.  He wouldn't say that statement, unless there are words on the other side of it that better elaborate what he was talking about.  But other than that, this looks like a film I can't wait to see.

The only thing that could spoil it would be if they tacked on a clip of Batman after the credits portrayed by a Bruce Wayne-less Joseph Gordon Levitt...
Posted by Honor Hunter at 12:11 PM

From the "director" of that pile of crap watchman?

You of all people should know how words/sentences are edited to sound much more dramatic for trailers. I'm sure it'll be fine.

I can imagine Clark asking afterward, "would you?", to which Jonathan would reply, "without question" or something along those lines, thus reaffirming Clark's moral foundation and trust in his earthly father.

Man of steel? What's this, the next iron man? Dark Knight Rises just broke my heart, maybe this will be the get-off movie: p

The movie seems to be a nice one. But the only problem is the director. I hope at least his this movie will have good reviews.