You can't handle the truth... 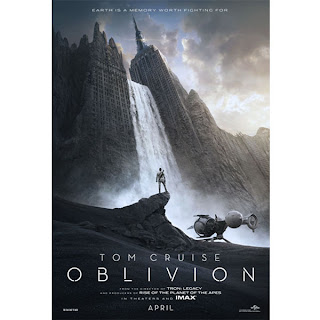 The latest poster is out for Disney's "Oblivion" film...

Well, it's not really a film by the Mouse, but it could have been, and was.  Joseph Kosinski's follow up to "Tron: Legacy" was based on a graphic novel that he and Arvid Nelson created for Radical Publishing.

Walt Disney Studios won the rights to the story over other studios, but after months of working on it decided that it wasn't the right fit for a Disney film.  They could have keep it and released it under the Touchstone Pictures banner, but it appears that that label is being used exclusively for Steven Spielberg's DreamWorks Pictures releases.  Of course, Disney still has the Hollywood Pictures label that could have been brought back to use as the release label of the picture.  But it was not to be.

The studio let the film go, and Kosinski shopped it around to other studios with Universal Pictures finalling deciding to take it up.  And now we have our first look at the teaser poster for the film.  Quite beautiful and apocalyptic, don't you think?

It makes you wonder if Disney did the right thing...

UPDATE: Right on the heals of the first poster being released, comes the first trailer for the film.  It has Kosinski's distinctive look, and you can see the influence of world building from his take on Tron here.  Very interesting.  April will be here before you know it.
Posted by Honor Hunter at 9:34 AM

Can we say.... Battlefield Earth?

Tom cruise? Then this is definitely going to be a great movie. I really want to watch this soon.