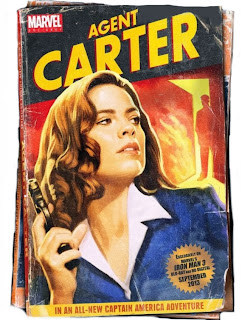 Or maybe that should be Agent Carter of the super-secret agency that becomes Shield...

If you haven't seen the Marvel One Shot: "Agent Carter" (a jewel of an extra on the "Iron Man 3" Blu-Ray/DVD, even the snazzy credits are cool.) then you've missed a fun little slice of female butt kicking.  It tells the story of what happened to Peggy Carter after the war ended.  At least thirteen minutes of it.  And it left me wanting more.

And it did the same to Marvel's Suits as the news comes that Marvel Studios is wanting to take the character and build a period series around her.  Forties espionage show?  Count me in.  Watching the beginnings of the spy agency could be a great idea for a show depending on how good the story is.

And that is where we are now with Marvel looking for writers to help them develope the pilot.  No confirmation that Hayley Atwell will return to play the character.  I hope that the beautiful and talented actress does play the role, unless they plan on making the show not part of the MCU.  But if they don't make it part of it, Marvel television would get very confusing quickly.  Can you imagine trying to figure out which shows are connected to the films?

While I haven't seen this short yet, I would be excited to hear Marvel taking a serious interest in developing more quality TV shows. DC has historically a better library of stuff (both cartoons for kids and live action), I think, but I wouldn't begrudge Marvel any if they stepped up their game. And a period spy series would be different and fun! If SHIELD does as well with audiences as expected, maybe something like this will get off the ground.