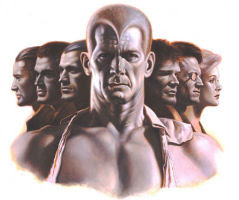 The director of the biggest box office hit of the year did an interview with IGN about the status of his next fim, the big screen, authentic, period themed "Doc Savage".  He goes on to discuss the problems of adapting a pulp character that makes Superman's goodness look gritty (think Raiders of the Lost Ark starring Clark Kent).  Add to this the problem of finding an actor able to carry the physique of this pulp icon and you can see the challenges that exists for this film,

But all films are a challenge; filming some movies are akin to going into battle with an army.   Star Wars was an extremely difficult shoot, any production that Stanley Kubrick mounted was a mental and physical challenge.  And the obsticles sometimes make the film better.

Black seems to have an honest take on the character and genuinely knows the material.  It's not like many productions that twist and contort a character until he's unrcognizable to the audience you're aiming for.  With his newfound clout, Shane Black is the perfect person to adapt this classic property.  He's a geek that's been made.  If anyone can make the film pulp fans have wanted, he fits the mold.

Now he has to find an actor who fits the mold...

Your blurbs about this pulp character have actually sparked some interest in me towards seeing the film. I was never a fan of any of the classic pulp novels (perhaps too young when they were at their peak?), but hearing your enthusiasm had definitely made me curious about the movies. After all, I like Indiana Jones and Superman, so squish them together and perhaps there'll be a synergy of fun!

I hope this turns out better than that awful 1980s George Pal movie..