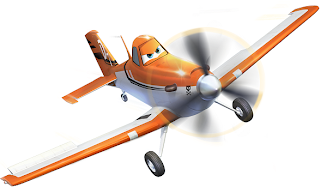 I know a great many Disney fans were passionate about their dislike of "Planes" from DisneyToons...

Or maybe the correct word would be dispassionate.  Many have decried the effort to make this film.  Many of the same didn't even bother to see it.  A great argument was made that it would fail, with a few openly wishing as much.   Websites, blogs and commenters have written about its opening box office as proof of its failure.

And those that were bragging about this have turned out to be way, way wrong.

Success for the Mouse or any other studio isn't determined by what we like or what we want.  It's what the market wants.  It's what the world likes.  It what life has a taste for, not how we want an image of something we love to appear as.

The direct to DVD film which got a theatrical release cost around $50 million ("Elysium"which came out the same week cost twice as much) to make and has generated around $138 million so far.  This is in addition to the merchandising sales, home video sales and interactive media.  So all this is essentially gravy to the suits in Burbank.  This is why the property is considered an evergreen IP.  Which is why the sequels to it are on the way.

This is the future of the DisneyToons production schedule.  It's the structure that was set up when John Lasseter took over most animation at the company.  The plans for the Cheapquells was scrapped and a plan was constructed to have the studio handle Disney related properties that weren't the main iconic characters of the films.  They wouldn't tred on the main story, but instead would sort of dance around it.

This was how the Tinker Bell series was resurrected from the ashes of the original plan and this is how the Planes idea came to pass.  As well as the upcoming stories this division makes in the future.  While it's not my cup of tea, it does have an audience and the quality of the films is far above what we were getting with "Cinderella III" and most of the other offerings that came out of the company before the Lamp's bosses took over.

It's not the films I watch, but not everything the Mouse does is.  We should all remember that the studio makes entertainment for many people. We can all have our own piece of the pie without having to worry what others are eating.

We have plenty to play with in the toy box...
Posted by Honor Hunter at 5:08 PM

Are you sure your statement...
The direct to DVD film which got a theatrical release cost around $50 million (twice what "Elysium" which came out the same week cost).

That was such a fluff article. Why don't you give us a rundown of the schedule for DisneyToon Studios like you did with WDAS?

I agree - "Planes" wasn't my cup of tea (I didn't go see it and don't plan to rent it), but there's a market for this kind of film and it did look better than the Disney Sequels of the past. Also, I will admit to being glad to hear that if the company intends to continue making these kinds of 'sequels', that they will sort of take place in known worlds rather than "mess with" the beloved stars of the classics. It was so very dismaying to love a movie and dream of amazing continuations of their story-lines and then be presented with the horrible, poorly done trash we'd been given.

With Planes marketing, it cost about $120 million. So it's gotta cross $240 million or more to break even. All toy sales and commercial/movie aside, it's one of the worst "directed" piles of crap I've ever tried to sit through.