Playing With Imaginary Friends While Growing Up... 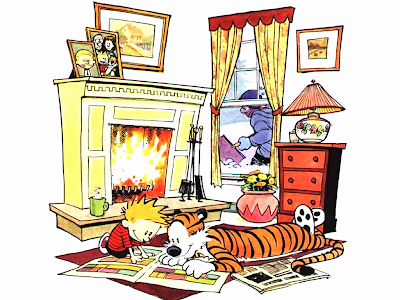 I have the entire collection(and will eventually get the Ultimate Collection) and frequently turn the pages to reflect on life as an adult.  It is an example of the sardonic genius that ink and paper can have.  Bill Watterson is a hermit who happens to be a brilliant storyteller.

And for what seems like forever I've wanted to see an animated film of this high spirited little fella and his vivid imagination.  I never thought I would get it knowing how Watterson was against marketing his creation outside of the newspaper pages.  It's not like he needs the money (he 's worth a reported $300 million just from the comic strip).  He's rejected offers since C&H was in syndication , which is why no child has been able to fall asleep with their very own, plush Hobbes to protect them.

The artist/author is notoriously recluse and has done less interviews than you could count on one hand.  Surprisingly, he has agreed to an interview with Mental Floss Magazine in which he talks candidly about his work, ripoffs and the possibility of a film of his famous creation.  He doesn't outright say no, but he makes it clear he doesn't believe there will ever be a film of his definitive work.

But isn't that what P.L. Travers said about her famous work, "Mary Poppins"?  She was stern, absolutely adamant  in her desire to not let Walt Disney make a film of her best selling book.