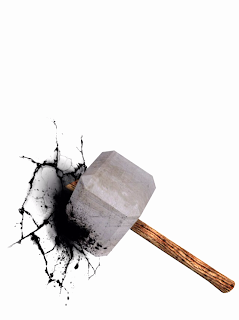 Marvel is simply cleaning up.  They are Pixar in tights and a cape really.  With all the success they've had in film, they've started to move into television.  First they moved into animation a few years ago and now they've taken their first step into live-action with "Marvel's Agents of Shield".  Development is starting to gather steam on a possible adaptation of the Marvel One Shot short, "Agent Carter".  Now, according to the trades they're about to go for a BIG expansion.

Deadline Hollywood says that Marvel is in the early stages of putting together a package of four television series and a mini-series totaling 60 episodes (presumably four series with 13 episodes each, and an 8 episode mini-series = 52) that it plans to take out to several media outlets.  Netflix, Amazon and WGN America are the services being eyed for the pitch of the unnamed shows. Whoever does bite will be asked to carry the purchase of all four shows and the mini-series.  No meetings have been scheduled yet as Marvel Television is reportedly packaging the projects and talent has yet to be finalized.

We have no idea which characters will be the focus of each/any of these shows but Marvel has thousands of characters to choose from (look how WDAS chose the little known group Big Hero 6).  There are several characters that I believe would be great properties for small screen adaptation.

One group if characters that this type of project screams for is "The Runaways".  It would almost play like a teenage version of "Supernatural" via superheroes in the place of paranormal.  Another property that might make for an excellent transition to television is "Cloak & Dagger".  The drama surrounding these two characters could provide a dark representation similar to something like "Buffy the Vampire Slayer".  Lastly, a cult classic like "Power Pack" could provide an alternative to most of the Marvel programming audiences are used to seeing.

Not that I have any knowledge as to what shows they are trying to develop.  This is just some friendly, unwanted I'm sure, advice.  Oh , and if they want to hire me as a consultant just e-mail me.

This is good news, as far as I'm concerned. Not every series will be a hit, I'm sure, but going for a diversity of ideas would be smart (some darker, grittier stuff, some lighter dramas, some snappy action-oriented shows...)

I rather liked Smallville (although not a rabid fan), so I kind of hope they end up doing something like that with a more well-known character along with bringing some of the more obscure teams/individuals out to play. There's a lot of potential in a superhero-universe, I think, and I look forward to seeing what Marvel ends up doing. In the meantime, I'll keep a close eye here at Blue Sky :-)

Power Pack is one of the most-unsung groups of superheroes, and it would open the world of Marvel to a HUGE audience of kids that may love the heroes, but is lacking someone they can truly identify with. And the Pack was a beautifully written series (I actually own the complete original collection) with a STRONG female character in the oldest Power girl. Then they crossed over with the X-Men, Thor, Spider-Man, Cloak & Dagger, and pretty much every other character in ADDITION to their own amazing story with aliens and the abduction of their parents. This needs to be done and done well. (And Cloak & Dagger is a combination of "supernatural" and gritty crime drama as the kids were going after the underworld that had created the drugs that caused them to become their superhero selves. I would love to see either of these properties come to life--literally.