A Good Beginning, A Great Middle, And A So So Ending...

You must become an idea... 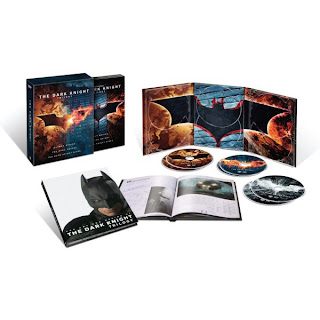 The end has come for the tale of Bruce Wayne from Christopher Nolan's perspective...

The Blu-Ray/DVD box set (British version pictured here) of the release of all three the films will be on December 3rd.  For all Batman fans it's a must have.  Arguably the best adaptation of any superhero, the film series sets a bar that all superhero films will have to strive for (both Marvel and DC).

While I wasn't exactly happy with the last film; it's first hour drags, there are plot points with Bruce Wayne, Alfred that are characteristically flawed, etc., the series a whole is an amazing accomplishment.  Nolan, Bale, Caine and company did an amazing job bringing from the page to the screen an incredible deep and textured story that anyone could relate to.

Now, all we have to do is wait four years for the reboot...
Posted by Honor Hunter at 9:43 PM

While I agree with much of what has been written about the recent trilogy, I disagree with the your assessment of the third film. Considering that 6-7 years had passed since Harvey Dent's death, there was a need to catch up. Bruce was still mourning Rachael and knew that Dent have been consumed by the dark side. He, as Batman, was viewed as a criminal. Naturally, he was depressed. Alfred, from what was presented, had tried to convince Master Wayne about rejoining the human race, but Bruce, as we have seen before, is a man of his own mind. Things did move a bit slowly, but the story needed to be set up. But once it got moving, there was no let up until the end. Sure, there were some flaws, what movie doesn't have them, but this Batman is truly the best adaptation of any comic book hero. In that I am in total agreement. However, I do hope that instead of a reboot, we see a new Batman or Nightwing emerge from that cave played by Joseph Gordan Levitt

You can never disagree with Nolanites. They are like cultists. Nolan can do no wrong in their mind.

You just can't help taking one more swipe at THE DARK KNIGHT RISES. You're pro-Disney/Marvel bias amazes me, but it's not surprising. TDKR is a masterful film that tied together the three movies in an amazing way. Christopher Nolan made an adult superhero trilogy that doesn't pander to children. If you want a kiddie version of Batman, then watch Batman & Robin. And yes, The Avengers was a good movie, but it was popcorn entertainment and didn't even come close to TDKR. Now lay off Disney-boy.

The only thing I found "off" about Rises was the "underground jail for evil people" and the plot holes that opened up. Otherwise it was fantastic.

There were a myriad of problems with TDKR. Alfred would never have abandoned Bruce. He promised him in both of the other films. Apparently GCPD are a bunch of Keystone Cops who fall for going down into the sewers and into Bane's trap. An atomic bomb detonates just miles offshore from Gotham and is apparently immune from radioactive fallout. Batman can heal himself from having a broken back in less than 3 months and come back stronger than ever to have a rematch with Bane who dies like a pussy after getting blown away by Catwoman. And nobody put two and two together and figured out that Bruce Wayne and Batman died at the same time? Even Blake apparently can figure out Batman's identity and has the gall to knock on Wayne's front door and tell him to his face. Not even Jim Gordon could figure it out who Batman was until the end but Blake can just by looking at him. Oh yeah and Blake is really Robin by the way. As if it really matters tacked on at the end.

"Now, all we have to do is wait four years for the reboot..."

That statement is oh so true. And yet there's still no Wonder Woman film.... Sexist media.

Anyone who talks about me having a pro-Disney bias when it comes to Batman or DC obviously hasn't read much of this blog.

It's interesting how divisive TDKR is... Some think it was o.k., but with too many flaws, other regard it as a successful ending of the trilogy and a great film in its own right.
Well, I think everyone is old enough to judge for him-/herself, and we can agree to disagree, so... Why be (too) serious?