Warner Riddles In The Dark...

One more ring to rule them all... 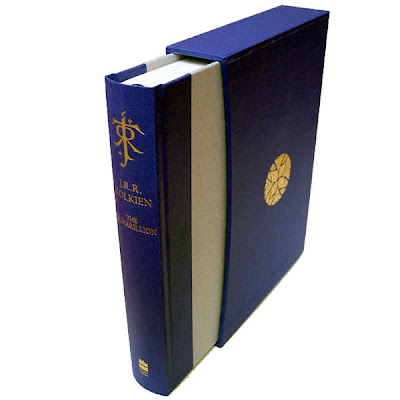 You've all seen the news about the expansion of "The Hobbit" from two to three films...

And now they've got names and dates, so we know what they'll be called and when exactly they'll come out. So when it's all said and done there will be six films, two trilogies, or a hexalogy if you count them all as one.

After summer 2014 the series will be done, and the next question would be is this the end? Would Warner Bros. be satisfied with ending it there? No more films or anything else? Not hardly, in the words of John Wayne. In this world where international markets rule the box office and branding matters, this series is a known property and it doesn't take as much to sell it to audiences.

So what would be next? The most obvious choice would be "The Silmarillion." Now, I know that a fan asked Peter Jackson at this year's Comic-Con about that. He mentioned that Warner doesn't own the rights to that book and the Tolkien Estate isn't very happy with his adaptations of the late authors works (I really can't understand why this is). But obstacles can be overcome. Hopefully Warner can get the Estate to license the rights to the books, because the films actually help sales of the books and seeing the film. An agreement would be mutually beneficial for both parties.

But even if it happens, it doesn't mean the book would be an easy film. It is a large tome of epic tales telling the history of Middle-Earth in a sort of lyrical tale that's not set up in the same manner as the LOTR or the Hobbit. But it leaves room for more interpretation and layering of characters. But it would be an epic film if made. Most likely it wouldn't be contained in one film, so there is the possibility of another trilogy, or perhaps, a miniseries on cable? Or even an ongoing series? Something like HBO,A&E or even Netflix could be a venue to transmit/broadcast this new property.

And then there are the other products like video games, books, shirts, toys, etc. that would/could be exploited. If they can't get the rights, or even if they do get it and want to continue other avenues, then they can go other routes. After all, there have been several games that take place in the world of Tolkien that don't involve the characters from the film. Could they not produce a film series, or television series, or even an Internet series that is completely unrelated to events of the book? Something along the lines of "Tales of Middle-Earth" or "War of the Ring" type of thing? The possibilities are endless really. And do you really think that Warner's Suits would want to close the tap on this revenue stream? Think again.

I don't know if you have ever read any interviews with Christopher Tolkien (the executor of J.R.R. Tolkien's estate). From all of the things I've ever read, there is no way in this life or the next that he would ever release any additional rights to make additional Middle Earth movie properties. It isn't that he doesn't like the movies; he's never seen them. He feels that any attempt to present his father's literary works in any other medium is futile. And it looks as though he will only transfer the legal rights of executorship to someone of like mind upon his death.

So while I know that most movie producers will not take "no" for an answer, in this case I believe the unstoppable force may have met an immovable object. I would be seriously surprised if we EVER see anything else from Middle Earth on the big or little screen.

The Hobbit is using parts from the Silmarillion/History of Middle-earth/Encyclopedia so as to include Thrain and Thror in the first two films and to likely recount Mordor and the Lonely Mt in their glory days. I think Middle-earth has the potential to be the greatest film series (and potential theme park) in the world if they continue to recount the history of the 3 Silmarills (story of the Elves), maybe some on the Wizard's back ground and more.

And the news just keeps getting worse and worse. Will the hobbit madness never end? I want to see other films, other worlds, other stories, not more of the same rehashes Middle Earth. Peter Jackson and Warner Brothers? You guys are greedy, cash-grabbing monsters. At least George Lucas stopped his film saga at Episode 6.

All my hope rests with Christopher Tolkien.

This news sickens me.

My feeling is the foul stench of dealing with the Hollywood studios accounting practices. The studios just won't pay up the royalties and fees unless compelled and even then, it is a hard thing to do.

What the Tolkien Estate should do is demand Millions of dollars upfront and a percentage of budget and gross revenue as well as a licensing sharing agreement so they act as a partner instead of a client.

As for the movies themselves, no movie will ever be a good as the source material. For myself, you should either watch the movie or read the books. You can't do both.