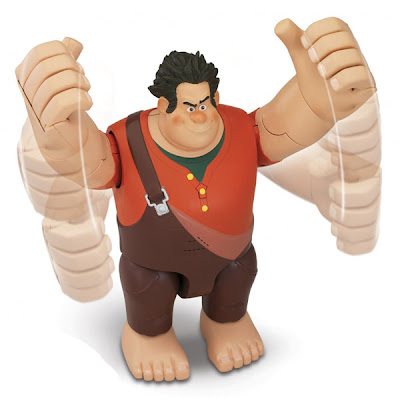 The new trailer for "Wreck-It Ralph" is out...

It's got more of the story, and explains how the film unfolds in a much better way than the first trailer. Overall, it's an improvement over a good trailer for a very entertaining film.

It's going to be interesting to note that this will be the first year in a long time since a WDAS film did better than a Pixar film. Still, it's fine. They're brothers fighting over who is better.

"It's going to be interesting to note that this will be the first year in a long time since a WDAS film did better than a Pixar film."

Are you saying that Winnie the Pooh was worse than Cars 2, or are you just talking box office gross?

Pooh was just as bad.

Neither of them were bad. This sort of drive-by criticism is especially annoying.

Box office gross.
Pooh was great.
(so was Brave)

Pooh was great! But I'd say Cars 2 and Pooh were equal in quality.

I'm going to assume you were referring to the quality of the films in your last paragraph, and not the relative box office gross. As such, WDAS definitely put out a better film than Pixar last year. I was sorely disappointed by "Cars 2", but "Winnie the Pooh" was fantastic. (I was rather surprised by how good "Pooh" was; in fact, it's now my favorite movie.)

Of course, I haven't seen "Wreck-It Ralph" yet, but, in my opinion, "Brave" set the bar really high as far as 2012 films go. But, just as you said, WDAS and Pixar are family, so hopefully we will get two amazing cartoons from the Disney empire this year.

He was referring to the box office, guys. Not quality.

If you've been a Blue Sky Disney fan for long then you've read Honor's posts on Pooh. He likes it a lot. So I don't think anyone should read into this that he's putting it down.

In fact, the argument seems to be among the commenters, not the blogger.

Pooh was pretty awful. Certainly nothing like the original 3 featurettes. The whole film is predicated on the misunderstanding of a word, which might have worked for a featurette, but renders the characters virtually retarded when stretched out to just over an hour. It just doesn't work. The Tigger Movie was better, and that was pretty lame.

Even so, I'd admit it was better than that horrible nessie short that was with it. Pooh wasn't the better for having that mess attached to it.

There's no wonder it flopped.