Building A Mystery Vs. Building An Adventure... 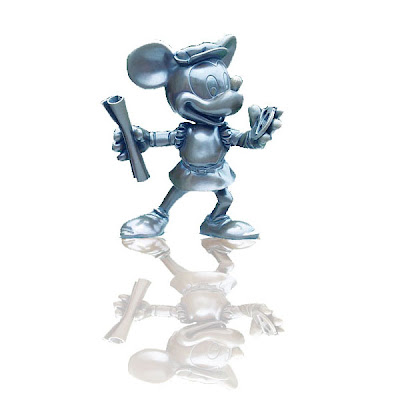 That's how many years ago it opened. The most beautiful, and amazingly conceived Disney theme park to be created swung wide its gates on this day. Eleven years ago Disney fans across the world had their eyes rewarded with a glittering jewel of unprecedented, glorious imagination. It's the most stunning theme park you will ever lay eyes on. It's an incredible accomplishment of creativity over commerce and an unquestionable success.

Two theme parks opened in 2001. One in the spring, the other in the fall. One in the original park, the other in the first country to have an expansion of a Disney park. On February 8, 2001, the Disneyland Resort opened up its second gate: Disney's California Adventure. It was born of no original thought and no clear direction. It had no purposeful meaning; it was simply a bunch of attractions in search of a theme. THAT was it's problem and the Suits in Anaheim and Burbank were the problem, not the Imagineers in Glendale. On September 4, 2002, the Tokyo Disney Resort opened up its second gate: Tokyo DisneySEA. It was born of an old, unused idea, but a very unique one. It had a purpose, a meaning and a direction. It was a theme park that was born full grown. Simply put, it was the best thought up park since the original.

Since then it has expanded and gotten bigger, gotten better (for the most part), and well rounded. This park is great for chiropractors because you'll spend so much of your time looking up and walking around in wonder that you'll get neck pains. I always wished that it had been built here, but since it was built in Japan I don't want a clone of that one. There are too many things that are cloned. Each park, Disney or not, should be unique. And while I wish that when I walk across the Esplanade at Disneyland, I could look up and see the entrance to DisneySEA, I won't, can't and now really don't want to see it there.

We here in California have our own park, and DCA has finally found it's own identity. It took a decade, but it finally found a place it belongs. So while I love DisneySEA, I only want original parks, no clones please. Disney parks aren't McDonalds and don't/shouldn't be. So the next park that the Mouse creates will hopefully be an original, not a clone. No matter where the next park is, be it in Hawaii, India, or South America (hmmm), there is no limit of ideas left in the minds of WDI, and shouldn't be. We deserve that and so do Imagineers. They deserve to work on projects that hold their heart and appeal to their creativity. We will all be the better for it.

But if you ever get the chance to travel to Japan and go to Tokyo, please buy a ticket to this park and see what a dream is capable of being.

Dreams should all look this wonderful...

I love Disneysea! It's amazing to experience. If you love Disney and theme parks, there is simply no better place to go.

Thanks for all your coverage of it, Honor!

Even after six years; it still holds my attention and my heart. I love that place.

And please elaborate on your obvious hint dropping. I really hope it doesn't mean what I think.

Honor doesn't drop hints, he just sort of rolls them out there and lets them bounce around till someone picks them up.

If Disney's building a new park, how about putting it here in the Midwest, in Missouri? Walt originally wanted Disney World to be built here, but couldn't find enough available land, or so the story goes. I would love to be able to visit a Disney park that isn't situated on opposite coasts, way too far away from me. (And very expensive to visit). To be able to visit Disney any time I wanted would be a dream come true for me...