These are the writers you are looking for... 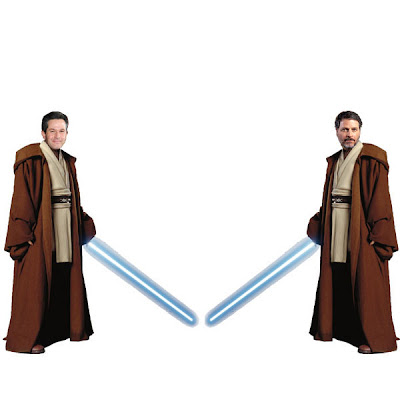 Ok, if you don't know Star Wars then that really won't help or make sense.  Let's just say that with each passing moment, everything we hear that the Mouse/Lucasfilm are doing for the third trilogy is very smart.  They appear to be treating this like the property they know fans value so greatly.

If you haven't heard the news, Lawrence Kasdan (The Empire Strikes Back, Return of the Jedi, Raiders of the Lost Ark) and Simon Kinberg (Mr. & Mrs. Smith, X-Men: First Class, X-Men: End of Days) have been hired to write the screenplays for Episode VIII and Episode IX.  It's not known if they will collaborate on each as partners or will one will tackle eight and the other nine.  Both will produce the film along with Lucasfilm head Kathleen Kennedy.

So from notes by Lucas, Michael Arndt (Little Miss Sunshine, Toy Story 3) created a forty/fifty page treatment, and will write the first film: Episode VII, Kasdan and Kinberg will write the rest and they will produce all three?  Thank the Maker!  Now all we need is a director.  Sadly, Brad Bird won't be the director (maybe he'll be the Irvin Kershner of this batch and direct the second if we're lucky), so who will it be?  I have my own ideas, but that'll be for a later post.