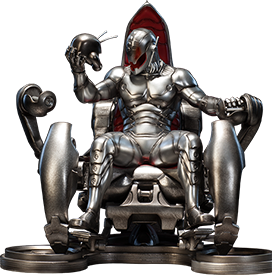 Well so much for those rumors of Paul Bettany being the villain of A:AOU...

Unless he is the pre-Ultron voice, presuming the talk of Jarvis becoming the megalomaniacal robot are true.  I did like the idea of Bettany becoming the Vision.  That's almost inspired casting there.  We won't find out for sure till we get closer to lensing on the film commences.  But I digress.

So if you haven't heard, Ultron has been cast. James Spader will be the persona of the Marvel supervillain.  It's not specified if he's going to just voice the part or MoCap it ala Mark Ruffalo's performance as the Hulk.  Read the official press release below:

James Spader will face off against Earth’s Mightiest Heroes as the villain in Marvel’s "Avengers: Age of Ultron," the sequel to 2012’s record-breaking "Marvel’s The Avengers." The Emmy Award-winning actor will play Ultron in the Avengers’ much anticipated return to the big screen from writer/director Joss Whedon. The film comes to theaters on May 1, 2015.

Spader earned three Emmy Awards for his role as Alan Shore on "Boston Legal" and "The Practice," and will return to television this fall in NBC’s highly anticipated series "The Blacklist." Most recently Spader was seen in the critically-acclaimed film "Lincoln" directed by Steven Spielberg and has previously worked with a long list of accomplished film directors including David Cronenberg, Curtis Hansen, Sidney Lumet, Mike Nichols, Tim Robbins, Robert Rodriguez, Steven Soderbergh, and Oliver Stone.  David Mamet also directed Spader in the Broadway play Race.

"Avengers: Age of Ultron" will bring the Marvel Universe’s biggest heroes together again to face one of their biggest villains, with "Marvel's The Avengers" director Joss Whedon returning to write and direct the sequel.  "Marvel's The Avengers" was released in 2012 and went on to earn $1.5 billion worldwide, making it the third largest grossing movie of all time.

I NEED Terrence stamp cast as a major villain in a MCU movie, so he could team up with Red Skull and the Mandarin, and we'd get the Masters of Evil as a Priscilla reunion.