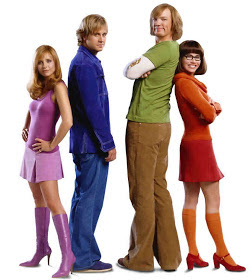 As much as I love the Mouse, the Bunny has a lot of love to offer...

Putting aside the fact that I'm a DC Guy (while loving all things Disney), not a Marvel Guy, there are many properties they own that I love.  And just like Disney, Warner has a great deal of IP that it has acquired.  While the Walt Disney Company has bought everything from Pixar, Marvel and Lucasfilm, Warner Bros. bought DC Comics in the 70's and through other mergers took control of major parts of my childhood.

One in particular would be Hanna-Barbera.

Most people today think of Batman as Warner, as well as the Flinstones or Johnny Quest (my fav HB property, btw) as always being a Warner Bros. property.  One of the most beloved of all HB series was Scooby-Doo (my second fav).  Kids today that pay attention wouldn't know the difference, but when I grew up it was HB that owned them.  And owned Saturday mornings across America.

Kids today might be more familiar with the "Scooby-Doo" 2002 film and the "Scooby-Doo: Monsters Unleashed" 2004 sequel.  Those films, particularly the first were decent although half-hearted attempts at bringing to life these beloved animated characters.  The law of dismissing returns after the second film put the brakes on what could have been a trilogy.  There have many animated series and animated films based in the characters, including the latest series, "Scooby-Doo: Mystery Incorporated".  That one was a high point over many of its predecessors.

But old characters never die.  Not when suits can take something proven and offers less risk.  Now, Warner Bros. has decided to move forward with an animated feature of the famous Great Dane and his beatnick crew.  The medium which it'll be animated in isn't known yet.  Several have speculated that it will be computer animated, although it wasn't clear if it would be CG or hand drawn from Variety's article.  Personally it would suit me to see it hand drawn styled like the classic 1969 "Scooby Doo, Where Are You?" series with more detail and higher quality. Everything doesn't have to have a 3D dimensional look to be good.  It needs a good writer with a strong story/script.

Which will it be?  Will the writers and producers try to achieve a film that pays homage to the original while moving forward for new audiences?  Will they hire the right director?  What animation division inside Warner will animate it?

That sounds like a mystery that the gang can try and solve...
Posted by Honor Hunter at 2:30 PM

How about the classic Scooby and Shaggy but in 3d? Like the moment when Homer Simpson came into our world?

The big problem with Scooby Doo is that it doesn't work in the live action version. The cartoon is quite engaging. The dog is the star, not the other characters. The ghosts were scary, at least to the kid that I once was. There is absolutely no sense of scare or suspense in the live action movie. The dog didn't have nearly as much screen time as the human characters. The women characters were underdeveloped. As movie, it was way too long. It should have been a mix of four different short adventures, perhaps no more than 20 minute segments each (omitting for commercials). Maybe they should go the Avatar route. Make everyone into a CGI. It will blend better.