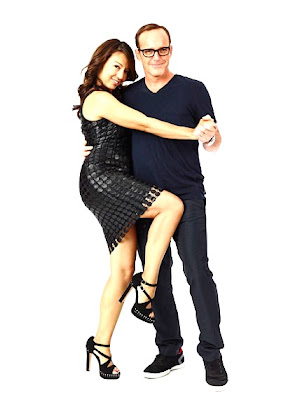 The most highly anticipated show this season has to be the "Agents of Shield" series...

Debuting on the Alphabet Network next month, the show based on the human exploits in a world filled with superheroes is the most high profile live-action series announced by any network this year.  At least any broadcast network.  Not to mention that it's from Whedon and takes place in the MCU.

Whedon did an extensive interview with Entertainment Weekly and discussed a laundry list of opinions, not all based on Marvel.  When describing the show, the director tonally said AOS is the series version of a famous "Buffy: The Vampire Slayer" episode:

If you're a fan of the cult series then you get a visage of what to expect.  In a world where these heroes take all the oxygen, others have to breath.  The world goes on,  people's lives continue.  Humanity is left to pick up the pieces and the show is about how normal people (that look remarkably pretty) deal with the repercussions a society after we come to terms with the existence of super powered underweared people.  Both good and bad versions of these beings.

Plus, being discribed as an "X-Files like model" by Jeb Whedon is a good thing also.  No shame in that kind of comparison.  Normal people investigating the abnormal parts of the life around us.  Watching this season develope will be interesting.  Joss Whedon's shows tend to get better as the seasons go on, like aged wine or cheese.  Here's hoping the show has a long, long run.

please write something about disney infinity. can we expect classic disney, 2d renaissance, marvel, muppets and even star wars in the line up?

As someone without access to TV, I sure hope this show ends up on Hulu - I really want to see it!