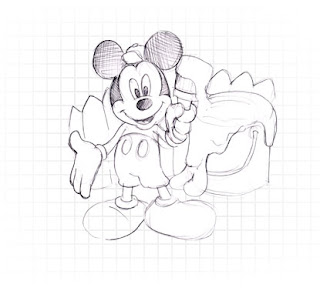 That report I mentioned a last week about "American Dog" getting screened by the Big Wigs of WDAS and PAS seems to have gone well. Over at the TAG blog, the animation guild's blog they're reporting:

"At Disney Feature Animation, the American Dog story reels -- unspooled in Burbank and Emeryville, met with the Brain Trusts favor. "The whole picture was up on reels, and the notes were pretty positive," a story artist told me. "The crew worked lots of o.t. getting things up in a few months, and they're pretty satisfied. They know they've got lots of work ahead, but the showings went well."

Work is progressing on various scenes being polished and the aim is a Fall 2008 release. I'll be glad when we see a trailer for this one, being as THIS is really the first "post-Pixar" film and will have the influence of Uncle Lasseter's guiding hand. Plus, I'm really curious about what the new designs look like. Based on what I've had described to me they look nothing like Chris Sander's work and I really want to see what Lasseter and Williams' "American Dog" will look like. What are your thoughts?
Posted by Honor Hunter at 11:49 AM

I think each studio should have it's own Identity. I really wish this had been the company's return to hand drawn animation.

I doubt American Dog will be just another Pixar clone. Word from the artists on the film is that even before Disney bought Pixar, the film American Dog was a huge mess. Nothing unusual, really, but with no one guiding the studio, the film had no central focus. Everyone knows the mild success of Lilo and Stitch was primarily due to Dean Dubois' ability to reign in the quirkyness through solid structure and gentle reminders that the audience needs to understand what's happening on screen. The combo of Dubois and Sanders seems to have worked fairly well.