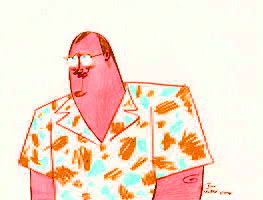 Like this caricature? It's one John Musker did of John. I think it's a perfect representation of the man. Cartoony. Full of life. Loud. Whimsical.

I've had this talk with friends. I love Walt Disney... I love animation... I love Disneyland. I think he's one of maybe five people that had such a dramatic impact on the American Experience of the 20th century. So during the last forty years or so there has been a hollow feeling all up and down the Disney lot. The seventies were the worst of it, I think. This was the "Grieving Decade" where the company really didn't know what to do. It's founder was so dominant, so towering over everything that happened at the studio that his lost didn't leave an empty space for the company... it left a Black Hole(pun intended).

Oh sure, the company came back roaring in the eighties. Say what you will about Michael Eisner, but he truly did revitalize the company in the eighties. If it wasn't for him, I really don't think there would be a Walt Disney Company today. Believe me, it PAINS me to say that. Because I feel Eisner was the main problem with the company for the last decade. And Michael was in denial about it...

But even with his leadership... something was missing. Sure, animation came roaring back(Thanks, Mr. Katzenberg). But I still think those avenues on the Burbank lot were lonely... calling out for a genius. Calling out for a Walt. When WDC purchased Pixar I believe that "Walt" arived. I know that's saying alot... but I think it's justified.

Maybe not the reincarnation of him... but he's got his soul. He has his understanding of story. He has his unbridled optimism and childlike view of life. I'm sure some of you will disagree with this. Hey, to each his own. We all have an opinion. This is mine.

I believe the care that Pixar puts into it's pictures is a direct result of someone of John's caliber. From all the people I've talked to that have had dealings with him... I'd say they agree. There realize he "gets it". All the story artist I've managed to have a discussion with would tell me of the reaction John would have when a movie was up on reels and they knew, just like animators did with Walt, that what he said was worth more than anything anyone else said. Boy, that was a long sentence... sorry about that.

So you can probably guess I was on cloud 9 when Pixar was purchased by Disney and John was retained as head of both Walt Disney Animation Studios and Pixar Animation Studios. And then, with my love of Disney theme parks and WDI in general, you can tell my jaw hit the floor when I heard he was Head of Creativity for Imagineering.

So, now we can look forward to rich immersive stories not only at Disney and Pixar... but the rides as well. As John said to the guys at WDI on his first meeting: "We'll not be making anymore mediocre rides". Yeah. I like that. I know some have complained about the fact that almost all new rides at DL are Pixar rides. I understand, but we have to realize that right now THOSE are the ones that are popular. Those are what Disney movies used to be. I can't wait to see the new rides John will develope for the Disney films he will be in charge of. You know, those ones which will now be made by "story tellers", not middle management that has no idea how to write a story.

I can't wait to get some pics of the new Studio John is building over on the campus next to Imagineering. I'm even hearing some buzz about something maybe happening to WDI's headquarters if all goes well with the other things John is planning. Let's all hope the work he's doing is successful. It'll give him more clout to make better rides, better parks, better films and a better Disney all around.

I mean, you want to see how much he's becoming like Walt? Remember after Walt had made Snow White and wanted another challege... so he started making live action films? Well, with Pixar now starting to make live action films we can look forward to that "Executive Producer John Lasseter" credit. How much longer before we start seeing "John Lasseter presents..."? I don't know about you, but this is going to be the most exciting time in a Disney Geek's life... at least for the next half decade. How do you feel about that?
Posted by Honor Hunter at 6:47 PM

While I think John Lasseter is a good storyteller, I certainly don't think he's up there with Walt Disney. Walt Disney?