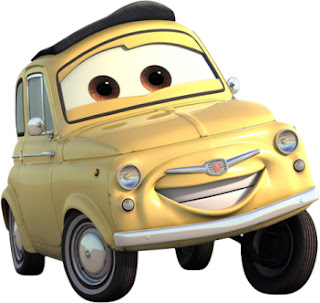 I've heard this rumor floating around for a while and didn't believe it so I didn't feel the need to post about it. I still don't know if it's true. Most of my sources are on the Imagineering side and the animators I know tend to work for Disney, not Pixar... so I can't varify this.

But Al Lutz over at Miceage left a little editorial blurb that mentions Cars 2 will be Pixar's 2009 release. He also mentions a new cars short for 2008 which I had heard about and did believe. But he says his sources confirmed it, so take from that what you will. Some people were thinking that Andrew Stanton was going to direct "A Princess of Mars" and have it out by 2009... I knew that wasn't right. The script for APOM isn't even done yet and it takes about two years to animate one of Pixar's films. That was a big, red flag right there...

It does fill a hole in their schedule:

So maybe Cars 2 will take that slot? If true, I wonder who Lasseter tapped to direct since he may be kinda busy the next few years...
Posted by Honor Hunter at 2:49 PM

Wow, that would be great news. But wasn't Toy Story 3 scheduled for release in 2009? Imdb gives that date ...

"3" was pushed back until 2010, which the site hasn't recorded yet. Anyawy, I wouldn't mind a Cars 2, as long as they can find a good enough storyline...

Why not a sequel to Monster's Inc.???

Cars 2 is not the best choice for a Pixar sequel. but it does make the most economical sense from a production stand point.

I want them to do a Incredibles sequel. Now that would be a great Pixar film to look forward to.

OMG. this is waaaaaay scary. after i saw the movie Cars for the first time, i had a dream there was gonna be a Cars 2. crazy!!

OOOMMMGGG!!!! i LOVE Cars!!! i bet Cars 2 would be just as great (if not 2 times better!!) i'm pretty much psychic about Cars stuff. i've had so many crazy dreams about this movie, and all of them have actually happened!! i would LOVE to see a Cars 2!!!!!

My kids and I were so hoping for a 2008 Cars 2. But I see now that isn't in the playbook. The marketing for Cars 1 was more than I have seen for anything since Toy Story 1. They are hungry for new characters and a Cars 2. Though new Cars 1 characters are coming out the still want more. Disney would be foolish to do something like the Incredibles (which I love but the kids ignored) over Cars.

Cars 2 would be great...it is love by all the kids i know down here in aiken n wagener SC!!! That's what we're hoping 4 a Cars 2 so we can get unaddicted to part 1 and get addicted to part 2!! Who's ever n charge better get 2 work if they wanna make some money.

Oh I can't wait for CARS 2 - my son is totally in love with the 1st, but watching it for the 20th times makes me wanna watch a new story :P

As for a good plot, it's not that hard. How about McQueen trying for European F1, introduce some European roadtrip that will be educational for the kids, and add an element of fun with a sexy french girl car (eg. Megane sport) that will make a love triangle!

Oh well, see, while waiting for Pixar I made up my own story!

Just by chance that someone over at Disney/Pixar would see this website, I wanted to add one more comment - I have two boys who LOVE, LOVE, LOVE Cars. I actually got to this website looking for a sequel DVD to purchase - I thought there MUST be something. I have seen people refer to a 'short', I guess that was what I was looking for - I knew that there had not been a major motion picture sequel, but hearing that they may be thinking about that is very exciting! My boys are young, so I am sure that they will still be VERY 'into' cars by 2010 or 2011, so I hope that PIxar makes it! But in the meantime, a 'short' would be nice too!

CARS 2 WOULD BE GREAT MY SON HAS NEARLY ALL THE DIECAST CARS TO GO WITH THE FILM AND THE REMOTE CONTROL CARS, HELICOPTER AND ALL HIS BEDROOM DECORATED IN LIGHTNING MCQUEEN HES SO BAD I HAVE TO WASH AND DRY HIS QUILT COVER AND SHEETS BEFORE HE NOTICES OR HE GOES MAD!!!! BUT AS IM SICK OF WATCHING THE FIRST FILM CARS 2 WOULD BE AN EXCELLENT ADDITION T HIS DVD COLLECTION PLEASE HURRY WITH IT

I'd enjoy seeing Cars 2, but also would LOVE to see Incredibles vs the First Family of Superheros. Yep, Fantastic Four!! What could they DO in Cars 2? Mcqueen wins piston cup, OR helps someone else win. Only 2 options.

Cars 2 is coming out, but it won't be until 2012. Pixar has a movie called "Up" which will be released in 2009. It kind of sucks that I have to wait that long. Cars is one of my favorite movies.

According to Firstshowing.net, There are several movies lined up for 2008-2012, Cars 2 is included in this link, several other movies are also listed:

my son is obsessed with cars and i would love there to be a new one not just for his sake but mine i watch cars 1 at least once a day!!!! please bring a new one out soon!!! i can actually mimic all the words (sad i no!!)

MY TWO YEAR OLD SON LOVES CARS! HE HAS BEEN OBSESSED WITH IT SINCE HE FIRST SAW THE MOVIE. HE HAS MOST OF THE DIE CAST CARS AND EVERYTHING HAS TO HAVE LIGHTNING MCQUEEN ON IT. I AM A LITTLE TIRED OF SEEING THE FIRST MOVIE BECAUSE MY SON PLAYED IT OUT LIKE EVERYDAY. I WOULD LOVE FOR A SEQUAL TO COME OUT. MY HUSBAND AND I REALLY LOOK FORWARD TO A CARS 2.

Umm, i jus wanna say that i am totally in LUVV with the movie Cars, and i would LUVV a 2, i luved it ever since it came out and ive been wishing and praying since then for there to be a Cars 2 and that most of the money i get from my jod, if it doesnt go to my horse, it goes 2 Cars stuff!

Cars 2 is said to be coming out in 2011. Along with a Pirates 4. The storyline for Cars 2 will be that Lightning and Sally settle down in Radiator Springs while he teaches future piston cuppers. And then his kids dont believe he was a famous race car so he joins the world circuit for one last race. I can't wait! As long as they have Mater and he's Larry the Cable Guy again. My son LOVES cars!

OMMMG iiiiii love cars omg i cant wait i have all the cars stuffffffff!!!!!!!!! ahhhhh its the best movie ever. I am going to freak out when 2 finally comes outt!!! i love pixar!

Cars 2 is will be released in 2010 and toy story 3 for 2009 but there are some concerns for cars 2.It looks like there will be some new voices for the movie,Paul Newman apparently has lung cancer.

For info on the the first cars movie you can visit http://www.disneypixarcarstoys.com/
They also have a great list of toys available on the web with info on the toys.

my son is obsessed with cars and i would love there to be a new one not just for his sake but mine i watch cars 1 at least once a day!!