Rats! Or the Power of the Mouse... 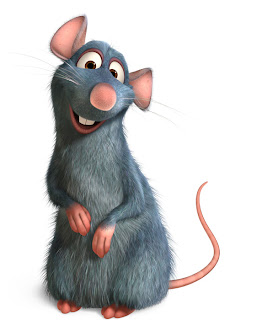 One has to wonder if Pixar's new film Ratatouille is going to test Walt Disney Pictures marketing departtment. Even though this one has had at least two trailer out to warm everyone to this coming Brad Bird film from Pixar... not much excitement can be seen.

Oh sure you have the Pixar fans(of which I am one) who can't wait to see this. You also have the fans of Brad Bird(of which I am one) that gladly look forward to whatever he does. But otherwise, when I talk to people it doesn't register on the "movie radar" for summer. Wheter this is Pixar fatigue or just being surrounded in a summer season choked with sequels no one is quite sure. It could also have something to do with the name which is almost unpronouncable to most Americans. Perhaps it reflects on our cultural distaste for anything French?

Again, please don't think I'm bashing Pixar or the film. I'm not. I love Pixar and the Incredibles is one of my favorite films. If you've read this blog and read my "Walt Disney 2.0" column then you should know my respect for John Lasseter. It's just that the vibe I'm getting is not the same as other films. I believe the marketing department over at the Mouse is really, really going to have to jump through some hoops to get people exposed to this film. The trailer is nice and all, but the reason I'll be seeing it is the little lamp logo in front of the film and Brad Bird's name where it says: "directed by". I have high expectations when it comes to Mr. Bird and I have a great deal of faith that he'll deliver with this film. But unlike other Pixar films that had huge buzz before they came out, I believe Ratytoowee, ratatooych... uh the rat film from Pixar will have to rely on word of mouth. Pixar is going through a growing phase right now and I this film and next years Wall-E are a reflection of that.

Here's to it opening big and getting bigger. It would be a shame for the films of Pixar since joining the Walt Disney family to start being boxoffice disappointments. If we want Disney animation to succeed as well as Disney theme parks we need Uncle Lasseter to get more clout as he settles in his new Glendale diggs. Let's just pray it all isn't spoiled by a dirty rotten rat...
Posted by Honor Hunter at 6:07 AM

I agree. There is not that much excitement about the film.

I will see it...for the same reasons you mentioned, but I wonder if this will be the closest thing to a failure for Pixar--due to the marketing problems associated with it.