A Frog By Any Other Name... 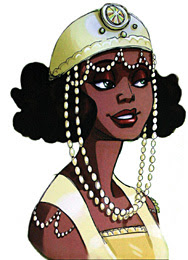 First, last week it was "American Dog" getting a new name that has yet to be decided on. Now comes some form of confirmation of a name change for "The Frog Princess". This is one I'd hoped wasn't true since I happen to like that name. Word has come through that TFP has had it's title changed to "The Princess and the Frog". Personally, I don't care too much for this. It sounds a bit too generic for me. Like something Filmation would have released straight to video in the late eighties.

Also comes news that the Princess... known as "Princess Maddy" will not/was not really Maddy, but is infact "Princess Tiana". I remember alot of people criticizing Disney for the name as racially derogatory. I hope this wasn't the reason it was changed as I abore anything that is PC. I also hope Disney's publicity people don't really expect us to think that it is just Wikipedia that got it wrong. Perhaps they should refer to the annual stock holders meeting where John Lasseter described a story about a princess named Maddy. I bet they forgot people heard him say that one. If they were to listen to everyone that had an objection to something they did there would be no classic Disney films in the first place.

Anyway, this appears to be legit since it came from corporate offices on official Walt Disney Company stationary and the Mouse's press people are backing it up. Hopefully, this is only a cosmetic change... the last thing I want them to do is start sticking their finger in the wind and doing what they feel is PC and not what they believe is right. That's not how Pixar has become so successful and that won't be the way Walt Disney animation makes a comeback.
Posted by Honor Hunter at 7:46 PM

I can't believe how hyper-sensitive people can be. It's like they're looking for you to offend them so that they feel validated that "life is out to get them".

Make the movie the way you believe it should be done. Political Correctness be damned.