Before The Cut, After The Fall... 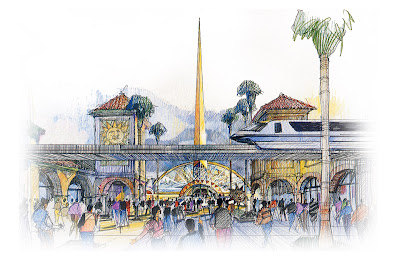 Those of you that want to get an idea of what Disney's California Adventure was going to be like before Paul Pressler told Barry Braverman to cut a third of the budget, should take a look at a post over at the Disney and More Blog. Alain Littaye's blog always has interesting stuff on it and this is something he posted a couple days ago. Sorry for the late notice, but if you want to see what DCA would have looked like with a budget of around $900 million instead of the $650 million it got, then give the images he posted from Disney's Press Kit for the future Second Gate a looksie...
Posted by Honor Hunter at 8:43 PM

You have to spend money to make money. Eisner forgot this after being in the command chair for so long.

It really was after frank wells died he needed a balance and didnt have one. after wells was gone he felt ever decision he made was the right decision some worked some failed , alot went wrong especially at the end

It looks much better than the DCA we got, but it doesn't hold a candle to WestCOT. And WestCOT isn't as good imho as Port Disney was going to be.

They got a jewel.

We got a turd.