Knowing When And Where To Hold 'Em... 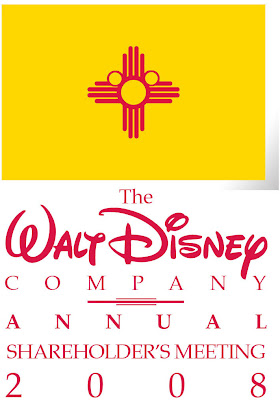 The Walt Disney Company held its Annual Stockholder's Meeting in Albquerque this morning...

It was a short one. Only about an hour and a half. John Pepper quickly introduced Bob Iger.

- The price of the Mouse's stock rose fifteen percent over the last half decade, which outpaced the S & P 500 of eleven percent.

- A list of many of the movies we've already reported on and their state of production. Not much new here.

- A new clip from "Wall-E" was revealed for the Stockholders that hadn't been released publicly.

- A very busy John Lasseter was unable to attend. Many were looking to hear from him regarding the state of Walt Disney Animation Studios. Suffice it to say, "Bolt" continues to bring on animators as it ramps up to meet the November deadline for its debut. Not much was spoken of in any great detail regarding the coming "Princess and the Frog" or "Rapunzel"... one expects next year's meeting to provide considerably more fireworks.

- Not much discussion of Blu-Ray though... interesting.

Overall, a very simple and lean get together. Roy Disney was there, but didn't take the stage.

If anything develops we'll have additional posts...
Posted by Honor Hunter at 11:28 AM

Is it true that they hold these meetings in out of the way places so that crazy annual passholders don't show up and start screaming about everything?

I mean, why Arizona? Why not have it in Los Angeles?

Do they let ANY stockholder in? Regardless of how many shares?

Yes. They have to by law. If you own a share, you can go. Of course you have to make preparations for it.

Spokker it was in Los Angeles last year, which I attended.

So, no news of Tomorrowland?

Spokker, what you heard is not true.

It was in Los Angeles two years ago. Last year it was in New Orleans. Some years it is in New York.

They try and hold it all over the U.S. so as many shareholders as possible can attend.

Albquerque is in New Mexico, not Arizona.

But I also heard that there is a crazy woman who goes to every shareholder meeting and screams about certain issues she feels strongly about? I think her name was said to be Evelyn Y. Davis.

Is that also untrue?

Albquerque is in New Mexico, not Arizona."

Listen, for a Californian that whole area is sort of the same thing anyway...