The Return Of Zorro & Davy Crockett? 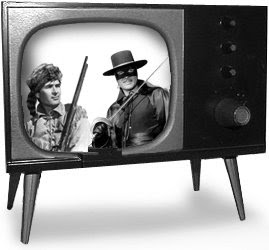 One thing I failed to mention yesterday regarding the Annual Shareholder's Meeting was Bob Iger talking about the every expanding presence of the Web in Disney's future plans. And those future plans could involve... the past.

As in vintage television series like "Zorro" or "Davy Crockett" along with numerous other series could be available via the internet. Mr. Iger hinted as such during his talk:

“In the near future, you’ll see more of that product available on Disney.com, either for free or through some sort of subscription,” Mr. Iger, 57, said at the company’s annual meeting. “Providing physical goods on DVD is tougher and tougher these days because shelf space is limited.”

In the near future we may find the Coon Skinned Cap Hero available at iTunes or Disney.com for rental or purchase. Just make sure you have a nice screen to view it on...

Interesting.
Posted by Honor Hunter at 5:27 AM

We will soon come to a time when Disney, as well as other studios, will have all content ever made (that is is still possible to be viewable) available to the public. Want to watch 'Circus Day' on "The Mickey Mouse Club", or the episode of "Wonderful World of Color" that aired on March 11, 1962? This will soon be possible. If it exists (on tape, film or other media) You will have it

THis is what I have been waiting for, the good stuff. I have my credit card all warmed up and ready to go.

BRING ON THE CLASSICS!