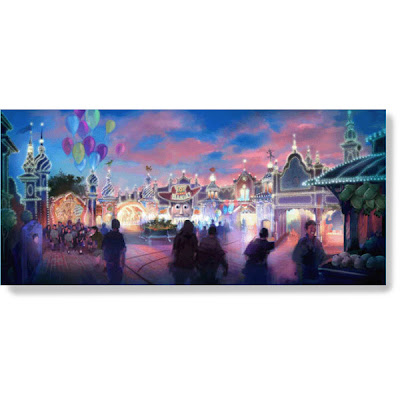 The Tokyo Disney Resort has officially announced "Toy Story Mania" for Tokyo DisneySEA. And it will be in the American Waterfront port of the park like we mentioned a while back. But it won't(thankfully) be going in the Cape Cod section of that lovely park. It was the original intent to put it there since that is the one area of the park without an attraction, but after the reviews came in it wasn't conceivable that there would be enough room without destroying the unique beauty of that area. The OLC is still looking to find something for that area, but something that won't take up such a large footprint.

If you'd like to read more on it, go over to Joe's website and get the details here. He also has some great news about constructing Cinderella's Grand Ballroom(no official name yet) inside of the castle there as well. Great read.

It's interesting to see how much you can put into a park that was almost perfect and make it more perfect...
Posted by Honor Hunter at 12:51 AM

Is that the concept art for TDS's version or the original DCA version?

This is Tokyo's version...

the outside looks great.. cant wait to see when open just to see how they made an already great attraction even better because of it being in Tokyo..

The art looks a lot like 1901 Coney Island (Luna Park) New York, which is appropriate.

Oriental Land doesn't always plus attractions... sometimes they're guilty of pure cloning (Buzz Lightyear). Would be nice if they did, though.

That's what DCA's boardwalk should look like. What is wrong with the ppl here.

DCA's Boardwalk is coming along fine...

I don't want it to look exactly like Tokyo's version. I've been to the park many times in the past few weeks and it's becoming a very detailed throwback to turn of the century Victorian styled midways. When it's finished in a year or so it'll be the bee's knees...

No attraction should EVER go into the Cape Cod area. The whole idea of having a section/land of the park set aside for relaxation is refreshing (no pun intended).

Note to Disney and the OLC: it is NOT necessary for every square inch of the park to push merchandise.

Please don't go all Eisner on us!

Ugh, the OLC fell for that one-Disney experience nonsense. Oh well. At least I went to DisneySea before it was Pixarfied.

Did you notice the price tag attached? 115 million on Toy Story Mania. 60 million on Philarmagic. 20 million on a walk through. and even 13 million on a Turtletalk. And other than maybe the castle, none of those are originally designed attractions. They seem to be fairly expensive for the return. I'd at least updated the Mickey Mouse Revue. For half that money, you could have done something pretty spiffy for it and still have maintained its uniqueness.

alright what next for toy story mania paris or hong kong ? honourhunter

Get over it, Spokker. They have Disney attractions at both parks. Always have, always will...

where exactly in the American Waterfront area is this going??

Kudos for letting us know of this addition ahead of time, Honor. Though looking at satellite images I had not been able to understand how it would physically fit in the Cape Cod area, so having it in the NY section (probably next to TOT) makes a lot more sense.

Also Honor - what's the word on Paris - will TSMM be added to Toy Story Playland or will it be just the three rides you wrote about earlier? Thanks.

Get over it, Spokker. They have Disney attractions at both parks. Always have, always will...Great comeback, Honor. Show Spokker that he's not such a hot shot.

And please don't forget to block him so he won't be able to post comments here anymore...

"They fell for that One Disney thing when they built the Indy clone..."

Not against cloning. However, I am against cloning an attraction regardless of content or merit, and they are going to have a hard time shoehorning Toy Story Mania into the American Waterfront, as well as Turtle Talk.

It's a park with so many unique qualities. The only thing we can hope for is that this Toy Story Mania, like Monsters Inc. and Pooh before it, is a vastly superior version.