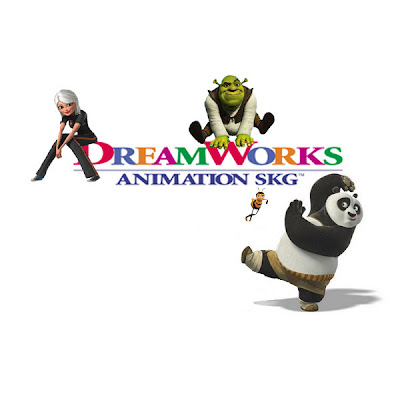 Looks like they're gonna give the Mouse a run for its money. The original plans were to release two films a year and now with the success of "Monsters Vs Aliens" and the wonderful "Kung Fu Panda" they've decided to release five films every two years. That's a twenty percent increase for those that are mathematically challenged.

How To Train Your Dragon - “Meet Hiccup Horrendous Haddock III, heir of the Viking chiefdom, but a boy with one very big problem: a hero he is not. “How to Train Your Dragon’ is the riotous story of Hiccup’s quest to hunt down the fiercest dragon, bring it into submission, and—hopefully—pass his initiation. Instead, he ends up with the smallest, most ornery dragon—it’s even toothless! Thus begins the hijinx of the world’s most lovable, unlikely hero and a most reluctant “beast.” Packed with energetic drawings and plenty of action, this boisterous tale is just right for fantasy fans or anyone with a spirit of adventure. Based on the book by Cressida Cowell.” Directed by Chris Sanders (you guys remember him, right?), and featuring the voices of Jay Baruchel, Gerard Butler, America Ferrera, Jonah Hill, and Christopher Mintz-Plasse.

Shrek Forever After (formerly Shrek Goes Fourth) — Directed by Mike Mitchell (Duce Bigelow, Surviving Christmas, Sky High). Shrek suddenly finds himself in a in a twisted, alternate version of Far Far Away, where ogres are hunted, Rumplestiltskin is king and Shrek and Fiona have never met. Now, it’s up to Shrek to undo all he’s done in the hopes of saving his friends, restoring his world and reclaiming his one True Love.

The Guardians — Based on an upcoming book series by William Joyce, whose work inspired Disney’s Meet The Robinsons. Described as “a contemporary fairytale based on existing fairytale characters,” Santa Claus, the Easter Bunny, the Tooth Fairy, Jack Frost and the Sandman team up to defend the world from a Bogeyman-like villain. Of course, the characters have been “somewhat renamed and massively reimagined”. The first book has a tentative release of Christmas 2010. Visual effects artist and animator Jeff Lynch makes his feature directorial debut.

Madagascar 3 — Directed by Eric Darnell (Madagascar, Madagascar: Escape 2 Africa), in the third film in this franchise we follow the animals as they travel this time to Europe as part of a traveling circus. Tom McGrath previously said that the would like to see the characters return to their home, the Central Park Zoo, but it doesn’t look like that’s going to happen any time soon.

Not chosen yet, but it will be one of these three projects that are in development.

The Croods (formerly Crood Awakenings) - From Chris Sanders and Kirk DeMicco’s comes the prehistoric story of a man’s position as Leader of the Hunt is threatened by the arrival of a prehistoric genius who comes up with revolutionary new inventions… fire. Sanders about the project: “The idea of having all the modern conveniences and social structures that we’re familiar with gone and being left with just a pure form of people was really fun to imagine working with.”

Truckers — based on the first of the thee books in Terry Pratchett’s best-selling The Bromeliad Trilogy, which tells the story of the Nomes, a race of tiny people from another world who now struggle to survive in the world hidden among humans. They find an artifact known as “The Thing” which teaches them about their secret history and make plans to return home. The screenplay is being written by "Slumdog Millionaire" scribe Simon Beaufoy. The film has been has been in development since 2001, originally with Shrek director Andrew Adamson attached to write and direct.

Super Secret Ghost Project (working title) — A story that examines what ghosts think about humans. Hilarity will undoubtedly ensue...
Posted by Honor Hunter at 12:08 AM

Disney plans to have a digital animated film out every 18 months and a traditional hand-drawn animated feature out every two and a half years. Over a six year period that would be six films. That'd average out to one a year...

That would put us back on a schedule like the Mouse had in the 90's, only this time they would actually have people that know about story in charge of the films. Of course, the strategy depends A LOT on how "The Princess and the Frog" does over the holidays.

more movies that I wont see.

There is not a single one on that list that I would want to see. I LOVED Kung-Fu Panda, but without the original directors at the helm and my belief that it was a one-time film and a sequel was never necessary, I can not in good conscience say I am excited for it. As for the fourth Shrek film - let's face facts that the series died after the 2nd film. The third film represented a bunch of ideas that might have made good material for the first or second installment, but when it came time for them in the third film, it was neither funny nor imaginative at that point.

Say what you want but Katz does know his business.

The only film on that list, I'd be even remotely interested in seeing is Truckers. Interesting since in one of his post-Slumdog interviews Danny Boyle said that he wanted to direct an adaptation of it someday, although I'm guessing his would be live action.

I'll probably see most of the Dreamworks stuff (all of it, on DVD or when I catch it on cable one day), but there's one thing that's beginning to bug me with all the animation--no "unknown" broadway talents anymore (I had no idea who the guy who did Sebastian the Crab was when Little Mermaid came out . . . or Ariel . . . Or Ursula). And never any traditional cartoon talent, like Frank Welker or Billy West. I understand having big names, but I didn't know the folks playing Belle or Gaston, and I loved Beauty & The Beast. Still do. And I hadn't heard from Robbie Bentson when he did the beast in, like, 15 years . . . but it was a great vocal performance. I'm just saying--and I love Seth Rogen--that sometimes stretching for the voice talent is a big part of making a great animated movie, and also helps inform that attitude with which those films are made.

Most memorable voice in The Incredibles? Violet Parr, played by Sarah Vowell, who was not exactly an international superstar. So much better than having her played by, say, Miley Cyrus. I'm just saying. Think End Product. That Dreamworks slate could be great . . . if they really think "end product" and not "marketing department". I remain optimistic, in a very subdued way.

So Disney was thinking "End Product" and not "Marketing" when they cast Miley Cyrus in Bolt?

From 4 pictures every two years to 5.

Isn't that a 25% increase in production?

Meh. Reminds me of when Disney over-saturated the market with their direct-to-video stuff. Wasn't Katzenberg part of that plan, too?

Dreamworks may spend more to develop these features than Disney did with its sequel shop, but if they don't have the talent to spread around it will just result in mediocrity.

The only two Dreamworks films I've paid to see in a theater were the original Shrek and Monsters Vs. Aliens. MvA was a total waste of time and money.

Until proven otherwise, their offerings continue to strike me as one tiny step above saturday morning Nickelodeon offerings.

Yeah... Not terribly exciting news..
I'm sorry to say that.

I hope for some of these to be good, i really do.

Awesome, so they're going to milk ot Kung Fu Panda and Madagascar for every cent they're worth just like they did with Shrek? I mean the original Shrek was actually a pretty decent and original movie and look at what they've done to that series. I can only imagine the joys that will await us with Madagascar 3 (not to mention Shrek 4, and Puss In Boots).

Sequels are a business strategy people! It weaves in some security to the release schedule and the cash flow. These films cost upwards of 165 mil a piece. If 1% of that was your own money you'd do the same thing.

And if you notice Disney/Pixar are starting to do the same thing Cars 2, Monsters Inc 2, Toy Story 3... ring a bell?

At least Jeffry is honest about it... unlike Laseter personally promoting the Tinkerbell DVD saying how great and original it is that Tink now talks.

Of course sequels are a business strategy, but that's no excuse for churning out crap like Shrek 3 and Madagascar 2. At least when Pixar does it they aim for quality.

You guys may not believe it, but Lasseter is actually proud of Tinkerbell...

He's not trying to just turn out crap and he's having the artist and writers work to make the next few even better.

He actually does like them, and it has nothing to do with marketing...

No, Miley Cyrus is "Bolt" was entirely marketing (just to be clear), and Bolt was not up to Pixar standards.

As far as Monsters 2, Cars 2 and so on go in comparison to Shrek 3 and Madagascar 3 (or Ice Age 2 and 3), I just refer you to Toy Story 2. It built on the original perfectly, hitting all the right notes, and was a great stand-alone movie, besides. I don't think I'd look forward to a sequel to any move more than I look forward to a Pixar sequel.

I'd love an Incredibles 2. And Dreamwork's Ooberman thing isn't going to be it.

I'll see the Panda sequel if Tai Lung is in it. Otherwise no dice.

Frankly, I think Katzenberg is going to wear out audiences with too much product. And then.. crash! Burn!

monster's inc 2 hasn't been announced and is only a fan rumor.

I other difference between Pixar's sequels and Dreamworks sequels is that Pixar only makes a sequel if they have something new to say.
Dreamworks makes sequels because most of their stuff does poorly. So when they find something that is actually good (and more importantly does good BO), they beat it to death.
Case in point, they announced ALL of the Shrek sequels before the 2nd one was even released!
And personally, I think Shrek jumped the shark about 10 minutes into the first one.

Anonymous said: "monster's inc 2 hasn't been announced and is only a fan rumor."

And therefore, you can believe what you want. But it's in development.

It's good that most animated movies are crap, because it makes stuff like Up look that much more special.

Finally Puss n Boots gets his own film! One of the best characters in the Shrek franchise with plenty of possibilities for exciting adventures.

Come on, folks. Antonio Banderas and Selma Hayek together again... how can you not love this? They were great in Rodriguez' Mariachi trilogy. This is going to be FUN.