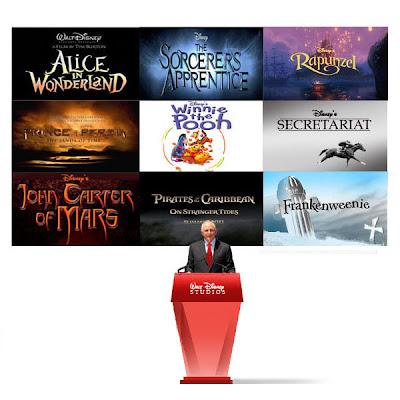 It's still hard to believe that Dick Cook is gone from the Mouse...

But his legacy will remain and his impression on the imprint of Disney will carry over for at least another couple years. There are many films in production and post-production that will be released between now and 2012 that Cook greenlit as Chairman of the studios. Some will be hits and others could be disappointments, but the final say on his effect on the company he worked at so long, has yet to be written.

I thought we'd look at several films in production that Dick Cook gave the go to:


Rapunzel - the Nathan Greno and Byron Howard directed, Glen Keane heavily designed CG film that has been in development almost a decade comes out during the holidays next year.

Secretariat - the Diane Lane vehicle about that famous horse, directed by Randall Wallace (who did a draft of the 20k prequel that I just happen to be trying to get a copy of).

The Sorcerer's Apprentice - the Nick Cage staring/Jon Turteltaub directed /Jerry Bruckheimer produce film from the group that brought you "National Treasure" comes this very loosely film based on the classic short from "Fantasia."

Prince of Persia: The Sands of Time - the next franchise, which insiders have labeled as "Pirates of Arabia" that the Mouse hopes to have from Bruckheimer was Cook approved a couple years ago with the hope that that would be what happens.

Alice in Wonderland - the first of two pictures with Tim Burton. This story tells how Alice finds her way back to Wonderland after confronting a real world in which the events that unfold prove to be too much for dear Alice.

Beverly Hills Chihuahua 2 - Do I really blame him for making this? Yes and No. It made a ton of money and would naturally spawn a sequel. So far Ross hasn't pulled the plug on this one.

When in Rome - the romantic comedy vehicle with Kristen Bell and Josh Duhamel that will show the world my future ex-wife is capable of opening a film. Thanks Dick.

The Last Song - the Nicholas Sparks/Miley Cyrus vehicle that also happens to star Greg Kinnear as the dad of a rebellious teen. This is Cyrus attempt to move beyond the Hannah Montana role and Cook helped her out with this project made specifically for her. Thanks Dick!


Winnie the Pooh - the return of the silly ole' bear that John Lasseter wanted and Cook whole heartily approved of comes to silver screens spring of 2011. There's that year again.

Pirates of the Caribbean: On Stranger Tides - the return of Jack Sparrow, which Cook announced at D23 is still on, but with Depp's schedule continually piling up with projects around the time this is supposed to start shooting you have to wonder. Any more projects announced for Johnny early next year and you can kiss the summer 2011 opening goodbye. The longer we don't here about this, the greater the chance that it'll fall apart due to the firing of Cook.

Frankenweenie - the second of the two films that Cook got Burton to agree to will be a stop motion retelling of the short, live film that Burton did years ago. Word I hear is that some of the Suits are so taken with "Alice" that they're wanting to extend the deal with a possible third film.


John Carter of Mars - this is Andrew Stanton's first live-action tale and his interpretation of the iconic pulp character. Cook approved this project after the prodding of Lasseter, and then looking at the the box office results of "Finding Nemo" and "Wall-E" didn't hurt either.

The Snow Queen - the new Chris Buck directed interpretation of the classic story has been in development as long as "Rapunzel." In fact, it's had some of the same people working on it. Glen Keane left this project years ago to work on "Rapunzel."

This is by no means a complete list, but a collection of several of the films that will play a role in writing the epitaph that is/will be Richard Cook's decades worth of service to Disney. There is also the possibility of films coming along based on agreements already in place (del Toro's Disney Double Dare You), sequels to past or current hits (Pirates of the Caribbean, Prince of Persia, Tron) or long gestating Disney properties (The Jungle Cruise, Swiss Family Robinson) that could be taken in to account. Clearly Dick Cook's influence will be felt long into the coming decade whether Iger likes it or not. One wonders if Ross' influence will linger as long after he's gone.

Studio executives have such a short lifespan I think we'll find out sooner, rather than later...
Posted by Honor Hunter at 8:11 PM

Or are we just talking about movies that we don't expect to be crimes against humanity?

That's not a Disney property...

"The Tooth Fairy" is a Fox film.

In a bold prediction, I have no doubt that these properties will make close to 3-4 billion in revenue on studio gross alone , not including merch, theme park, etc.. Sometimes studios have miss'es but I still dont think cook should have been let go, i think these next two years 2010-11 were really his rebound years.

Wow. My mistake. I guess after G-Force and Chihuahua I've started immediately assuming the worst. Or maybe it was that Julie Andrews and The Rock appear in the movie.

Anyway, my apologies to Mr. Cook for the assumption, because even G-Force looks about 100 times better than Tooth Fairy.

Is Julie Andrews hard up for money? Why is she doing crap roles in crap films?

You wrote, perhaps in a Freudian slip: "...writing the epithet..."

I think you mean 'epitaph.' An epithet is a curse or expletive directed at someone...

Was that a slip up?

That looks like a nice slate of motion pictures, to me.

any news on King of the Elves?

slashfilm claims KotE has been canned.