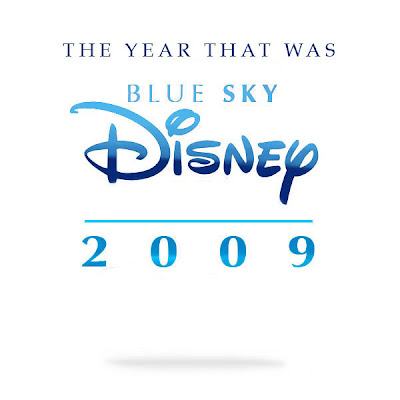 Wow, I can't believe I logged that many but apparently not sleeping leaves me the opportunity to do all these. Since this blog started (recently celebrating our 3rd anniversary) I've done almost 2000 posts. With that in mind let me take a moment to put the spotlight on several posts over the year that have gotten a lot of comments/e-mails, ones you might have missed or that I simply think might be worthy of a second look...

Being a fan of film posters/art I did this post of classic Disney marketing known as "Raiders of Lost Art."

And Decadent Dave just loved my post about George Lucas' move to the Dark Side called "The Turn."

Then there was this one where I dreamed about projects that I would love for Walt Disney Studios to film entitled, appropriately, "When I Dream."

I've always loved it when a company makes a great product. This post focused on some of Disney's best products that most people don't know about entitled "The Beauty in All Things Tangible," and yes, I know it's called Part One. Part Two is coming.

Indiana Jones and the Kingdom of the Crystal Skull disappointed me, would be an understatement. Here I put a review of a script of one of several attempts to make another Indy film back in the Nineties called "Indiana Jones and What Came Before." And again, yes, there are more coming this year. I have two that will hopefully appear sometime soon.

And long before Bob Iger announce his acquisition of Marvel, I noticed the lack of super-heroes at the Mouse in "Without Tights" and suggested some independent properties that could be ripe for filming under Disney's moniker/logo.

I reported on Tokyo DisneySEA getting Toy Story Midway Mania before it was announced and out there on a web last year in a Blue Sky Buzz entitled "The Sun Also Rises in the East."

And all the changes that came to the Electrical Parade in this Blue Sky Buzz known as "Electrifying Changes."

Then there was this one about "The Most Important Character in Tokyo" that would surprise most Disney fans here.

I got a lot of flack when my birthday greeting to DCA's Eighth Anniversary entitled "Mary Shelly's DCA Turns Eight."

And one Blue Sky Disney's other authors, Shrunken Ned put up this some nice examples of Kem Weber's wonderful design work in "Deco Digs to Animation Cribs."

Some people were reporting that the Tower of Terror would become a theatrical film and I shot that down in "Tower Film a Ghost Story" for the time being. No plans at least under Dick Cook. We'll have to see what Ross does.

There has been no official response from the Lamp, but I mentioned that Monsters Inc 2 was in active development almost a year ago entitled, "Just What the Docter Ordered" and it still is, I might add.

Colonel Kurtz gave his view of all the remakes that Hollywood were doing in "Dastardly and Muttley in that Wacky Hollywood."

And the latest look back on a decade of Disney posters is logged in "Retrography: The 90's."

I lamented on the differences between the DCA Monsters Inc. attraction and the Tokyo version in "Monsters Vs. Monsters" with links to videos!

And when Michael Eisner was seen walking around with a cain, I put up my alibi entitled "I Know Nothing."

We reminded people that even at Pixar, ideas begin hand-drawn in "Pixar In Pen & Pencil & Paper."

The Walt Disney Company became the largest entertainment company in the world and I noted that "It's Lonely At the Top."

And one of the most popular posts of the year was the comparison of "What Was Gotten Versus What Could've Been" about Tokyo DisneySEA and Port Disney. Part One, of course.

Some of my favorite Pixar film, The Incredibles incredible artwork was featured in "Syndrome's Island." It just shows you more of the genius that is Brad Bird.

Jay Rasulo's decision to clone Toy Story Mania was broke here in another Blue Sky Buzz called "Toys For Everyone."

And we compared the different looks of the park websites of the Mouse in "Websights For Sore Eyes."

And that was just the first third of the year...
Posted by Honor Hunter at 7:45 AM