A Clash Of Cultures... 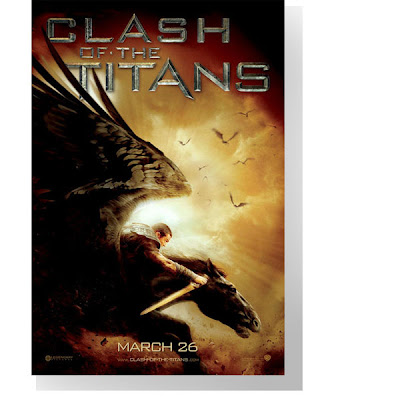 I was wary of this new "Clash of the Titans" remake as it seems that they're remaking everything that has ever been made. But when I heard Lawrence Kasdan was writing the script I sensed a bright spot. He's been rewritten since his draft was turned in by Travis Beacham; who is working on Disney's remake of "The Black Hole" and writers Phil Hay and Matt Manfredi unfortunately. But the vibe on this continues to grow. The pics so far have got me mildly positive about this film, but this poster is rather swanky if you ask me. I'll always wanted my own flying horse.

See this poster and a few awesome banner/stills over at Yahoo! Movies

The trailer looks like a vast improvement image-wise of the orignal but lacks that wonderful camp value. The HD version is at http://pdl.warnerbros.com/wbmovies/clash/cott/trl1/COTT_DomesticOnlineDebutTrailer_1080.mov

If they were going to remake anything, then I think this at least deserved the CGI treatment.