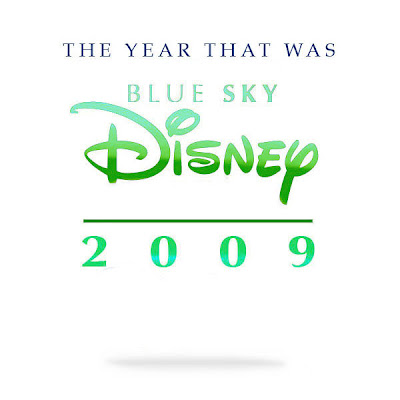 And here we are with the second of our three part review of some of the more interesting posts of 2009 that Blue Sky Disney had. So without further ado...

Finally, Disney and the Oriental Land Company announced what we told you about earlier in the year. Toy Story Mania was coming to Tokyo DisneySEA in "American Mania in Tokyo."

We looked at what Disney under Dick Cook's strategy was going for in the film division in "Lights, Camera, Action."

There was the passing of Wayne Allwine and his coming replacement as Micky's voice in "A Fourth Echo."

And Blue Sky Disney celebrated the day cinema changed forever, at least for me; and probably several million others in "32 Years Ago in a Galaxy Far, Far Away."

Finally, the second part of my "What Was Gotten Versus What Could've Been" was posted. DisneySEA fans and Port Disney fans hearts felt the crush of what Japan got and we could have had.

We then talked about Pixar and their flawless record in "A Perfect Ten."

I posted this one with links to a trailer for a new Star Wars game that made me think this was "What The Prequels Should Have Been Like."

The hole in Disney's animation lineup was filled when it added a new hand-drawn film in "More Pooh For You."

And here I celebrated my favorite film of all time and the only true out of body experience I ever had at the movies with "The Greatest Action-Adventure Film Of All Time."

Shorts at the Hat Building got the attention of this post entitled "Short Sighted."

All those people that believed "Up" would fail because no one wanted to see a 72 year old action hero I laid into in "The Experts That Aren't" right here.

Steve Jobs finally returned to Apple and we let everyone know in "The Return."

And when it comes to Star Wars animated series, I gave an example of what "The STAR WARS Animated Series I Want To See" would be.

And the talk of a new Club 33 type of place over at the new DCA was the point of "California Sweet."

Pixar's "Up" became the second highest grossing Lamp film and I mentioned it along with posting some swanky poster art in "Second to None, But One."

Great home movies of the making of Star Wars was linked from this post, "Decades Ago, In A Galaxy Far, Far Away."

You want to see how busy Tokyo DisneySEA can be at its opening? Then check out "The Rush" and remember that this is the park that has less guest in it.

Some of the "Tron Legacy" artwork that was shown at Comic-Con was the focus of "The Art of the World of TRON: Legacy" post.

Most people don't know much about the Disney Strike back in the 40's and even less know that it contributed quite a bit to the creation of Disneyland. Check out the footage of the picketing in "The Seeds Of Disneyland."

Here was the first release of some amazing concept art for "Rapunzel" in "Rapunzel Begins To Let Down Her Hair."

Disney went to the patent office for a certain web domain that I mentioned months before this post called "Copy Right."

Some great artwork can be found in this set of cards released for "The Princess and the Frog" in "Fortune Teller."

And John Hughes passing away had a profound effect on me and countless other children of the 80's. I paid homage to him and his work in "Fifty Nine Candles," "PULSE: The Stories Of John Hughes" and "Not Forgetting About Him."

On its tenth anniversary, I talked about "The Greatest Non-Disney Animated Film. Ever."

The Lamp has had an amazing run, but nothing last forever, so I wondered "When Will The Lights Go Out?" in this post.

Without a doubt, the biggest news for the Walt Disney Company in 2009, was the purchase/merger of Marvel Comics into the family. Naturally, Blue Sky Disney covered it quite a bit. From "Mouse Buy Marvel" to "The Statement" to my own personal commentary, "Part One," "Part Two" and "Part Three" and "Marvelous" here.

Hilarious how many Disney-unrelated Star Wars posts there were in the last year.

Honor has addressed this and his explanation is totally justifiable. Don't like it, don't read it.

Considering he's posted over six hundred post this year, no. No, I don't think it's that many posts about Star Wars.

I do think he says There goes that year again, way more than he's mentioned Lucas and his creation.

Let's talk about the shorts some more. As you know by now, there was NO short in front of The Princess and the Frog. Yeah, I was disappointed. And there's still no mention on the disneyanimation website about Tic Toc Tale. What happened to that one? The shorts collection DVD is a great idea - something I'd love to own, because I often never even get to see these shorts - and I hope they also include Destino.