The Future @ The Corner Of Santa Monica & Glendon... 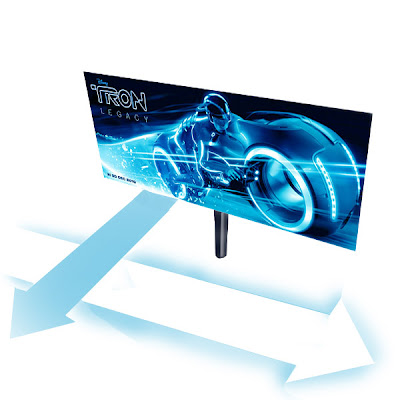 Those of you in Los Angeles traveling down Santa Monica this morning got a nice surprise...

On the corner of Santa Monica and Glendon is a billboard with a new image from "Tron Legacy" that will change with each passing month. So if you add it up that's at least eleven more awesome images to look forward to before we see the actual film.

I've heard from sources that we should be seeing a teaser for the film sooner than you'd think. But this time it'll be a real teaser and not the proof-of-concept one that was shown put online earlier this year.

Also come 2010 expect to see a lot of promotions in the parks. By summer time I'd expect certain areas of the parks to begin to be flooded with merchandise; building to an intense marketing campaign that overwhelms the parks right after the Halloween season ends. Tomorrow land should be very interesting with Star Tours closed. They'll have to have something to keep people in this area and I wonder what it's going to be?

Oh and if you want to see the actual image on the billboard without any perspective then put another coin in and proceed down to play the game:
1
2
3
4
5
6
7
8
9
10

It's things like this that make me wish I lived in L.A.