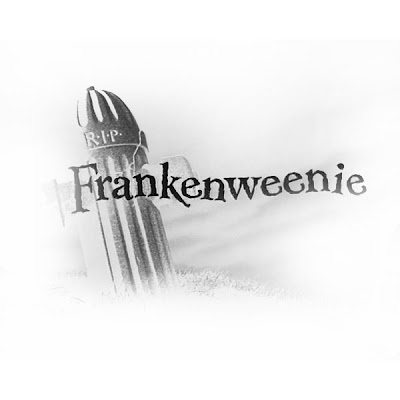 The casting breakdowns for the new Tim Burton stop-motion remake of his "Frankenweenie" short are out...

Bloody Disgusting got hold of much of the cast for the film and it gives you an idea as to how the stop-motion film will different from the original with several plot details:

[EDGAR] A Caucasian Male 8-11 years old. Edgar is a needy little kid who wants desperately to be accepted by the cool kids in his class. Naturally a little nerdy, he gravitates to Victor and basically annoys him until he agrees to let him be his lab partner. He is more than a little gullible and is easily tricked into giving away Victor’s precious secret and unwittingly starting the whole mess with the other monsters.

[TOSHIAKI] A Japanese Male 8-11 years old. Toshiaki is the natural leader of the cool kids in Victor’s class. He is a good athlete, and an avid little league baseball player but Toshiaki has a mischievous side. He is the one that ultimately manipulates E into giving up the secret of Sparky and it is his idea to turn the other animals into monsters. He is Japanese and his monster creation is a little Godzilla lizard.

[BOB] A Caucasian Male 8-11 years old. Bob is the dumb, jockey kid. He has more brawn than brains. He follows Toshiaki and Nassor around even when it means that he has to be the one to test the home made jet pack that Toshiaki has created.

[NASSOR] A Middle-Eastern Male 8-11 years old. Nassor is the star of the little league team and just goes along with Toshiak’s plan. He is a bit more serious than the others but still doesn’t see the impending chaos when he chooses to bring his hamster mummy back to life.

[WEIRD GIRL] A Caucasian Female 8-11 years old. She has a very dark and ominous take on even the most mundane occurrences and jumps at the chance to bring some dead animals back to life.

[ELSA] A Caucasian Female 8-11 years old. Elsa is a sweet girl who likes to follow the rules and not cause too much trouble. A bit of a “goody two shoes,” she is not afraid to speak up and even corrects the teacher when he makes a mistake. She is excited about the festivities planned for the town’s Dutch Day parade and even has a solo dance number in the show.

Sounds interesting, love stop motion. The only problem is that Burton gets all the credit for 'Nightmare Before Christmas' when really it's Henry Selick's success. I just read a recent article on Jeffrey Katzenberg, he actually had the audacity to call himself the modern day Walt Disney. All the movies Dreamworks makes, al their money is an excuse for poor story telling. They reduce ti the lowest forms of humor and resort to big name actors to make their movies sell. Pixar doesn't have to do that, why, because they're the best storytellers on the planet apart from Disney. Dreamworks uses so many cliches and unoriginal material, Shrek is not original, check, it was ripped off from Steve Oedekerk. They're reduced to pop culture references, the only reason to their money is that kids want to see family friendly stuff, which only kids see, we who are more knowledgeable see a pile of junkian trash of pop culture. Kids never notice that stuff, they only want to see fairytales and such. That's what Dreamworks really is, an unoriginal, pop culture riddled movies with no heart or good story to tell.

This sounds really interesting! I can't wait to see some pictures. I have a feeling that we could be seeing Frankenweenie toys alongside Jack Skellington and Zero for years t come (no doubt Disney is hoping so!).