It all started with a rat... 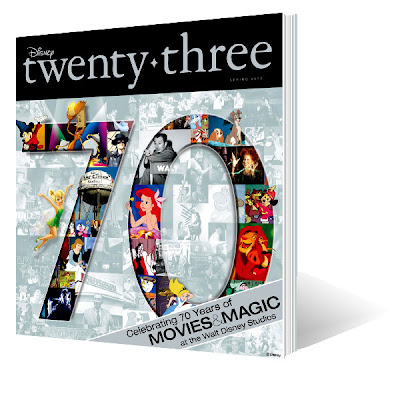 The upcoming D23 magazine will celebrate seventy years of film from the Walt Disney Studios...
It won't be out till February 2, but here's a look at the cover. Through the perspective of time you can see how far the little studio has come. From creating little animated shorts to theatrical animated features to moving into live-action films to television to many television series to multiple film divisions to internet. A long way over such a specific passage of time. Today the studio is busy with several projects that will cost a quarter of a billion dollars each. At least three will be out in the next year with more to come the following year. Not bad for a tiny little place on Hyperion Avenue in a quiet suburb of the sleepy town of Los Angeles, huh?

Just imagine what you can do with a dream...
Posted by Honor Hunter at 3:06 PM

Very cool. I'm a member and I can't wait to receive it in the mail! (Along with the archives gift!)

I'm very excited, but wasn't it 70 years three years ago?

Walt and Roy moved the studio from Hyperion Ave to Buena Vista St and Alameda Ave in 1940. That's the anniversary that they are celebrating.