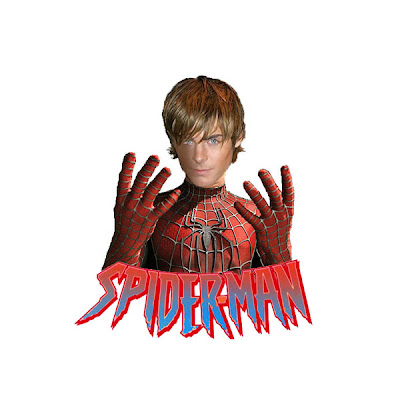 There are rumors circulating out there that a certain Web Slinger has already been chosen...

And if you've been following the blog you'll know that I wouldn't be very happy were they to turn out to be true. But it is supposed to be Johnny Quest himself. Or at least the guy that some Suits wanted to play JB. Now, he was wrong for that character because he was way too old, but he's just as wrong to play your friendly neighborhood Spider-Man.

Zac Efron has been hand-picked by Tobey Maguire himself as the replacement. I'll believe it when I see it in the trades... until then it's just an extremely viscous rumor that hasn't been substantiated. I can't believe that they would think we'd buy Zac as a high school student; I didn't buy him as a high school student years ago in HSM so I can't imagine him as one now. I very much doubt this to be true, but should it turn out to be so I've got my pen ready to spill out venom at the Sony Suits and if that doesn't work, I know a gypsy down by the rail road tracks that will curse anyone/thing I want for a six pack and a carton of cigarettes. In other words, I'm exploring my options should this bad idea turn into a horribly true nightmare.

Till then, I'm keeping my powder dry...

I don't care for Zac Efron either.

This would ruin comic book movies as we know it. Cast an unknown in the roll, it'll work better. People want to see Spider-Man, not Zac Efron. Look up the problems of production that plauged Superman. Christopher Reeves was an unknown, now he IS Superman. Zac Efron is a terrible actor, hire an unknown so that we see SPIDER-MAN. You know who Warner Bros. first wanted to play Superman; Robert Redford, imagien how that would've been. People wouldn't have seen Spider-Man, they would have seen Robert Redford. That's like electing the Abraham Lincoln animatronic at Disneyland for president of the United States, it doesn't really work.

This would be perfectly hilarious. But I've read in the past that Efron wishes to distance himself from the Walt Disney Company... and even though this isn't a Disney movie, Spider-Man is now technically a Disney character.

In this new decade of Edwards vs. Jacobs, this could very well be true.

Those Efron rumors are just rumors, I personally believe. Didn't he just sign a two picture deal with WB?

Although, can't Disney make a case out of this and get the film rights into their hands? Couldn't they say that Sony is deliberately mishandling and destroying the reputation of their franchise by prolonging the development?

What is worse then this delusional remake of Spiderman?

Hunter, have you heard about rumblings about Disney's aggressive action plan against Paramount to gain back custody of the Marvel films under the Paramount deal?

IESB has a good history with their rumors, but a couple things.

It's 4 billion, not 5 billion as the article states. Actually, 4.3 billion if you want to get closer to the real price.

And the agreement only has two more years. It' expires after 2012.

And I believe the distribution agreement was for five films (correct me if I'm wrong), so that automatically wouldn't include "Iron Man 3," wouldn't it? That would be the sixth.

I wouldn't worry about it unless later this year we start hearing about rumblings from the Mouse's lawyers. If they're planning on getting aggressive on an agreement that is essentially about to expire then I think Sony, Universal (both film and theme parks) and Fox better lawyer up.

But I'll wait till I see Iger get that involved before my eyebrow raises...

No honor, you read that wrong. It's Fox that has Daredevil, along with Fantastic Four and the X-MEN UNIVERSE.

Universal still holds the rights to The Hulk, (hense why The Incredible Hulk wasn't part of the Paramount distribution deal).

Now I'm am sure that after Iron Man and the Incredible Hulk the deal WAS increased, I am sure I read that and it was to 10. I may be wrong, or it may have fallen through or something. I know they were readying other properties.

Eitherway somehow Iron Man 3 is going to be paramount - at least thats what they think.

These Avengers movies are of course the first step for Disney to reclaim all the franchises.
1. So either wait for Paramount deal to end or cut them out somehow, in the meantime get working on the Hulk property at Universal.
2. ??? Spiderman??? Daredevil??? F4??? X-Men??? Blade... not so sure about that :P

Too old for this character as well.

Not nerdy enough either.

Too popular as well.

I think you need to be able to say "what the f... is she doing with him?" when you see him with a hot Gwen Stacy or Mary Jane.

For Mr HSM, no one will notice that. Girls will be drooling too much, and guys won't buy him as Spidey.

So in summary. As far as Sony's concerned this is an awesome idea as they clearly want to screw the property up as much as possible.

Hopefully they do and the film performs bad. Then there may be traction on Marvel reclaiming their universe.

I know! We can get Joel schumacher to come out of hiding to direct. Lets also get Swartenagger as Doc Oc and we can add nipples to all the costumes.
This is why Hollywoos is in trouble and laying off more people

Although I think this is just a rumor, I don't understand the visceral, knee-jerk hatred for Efron. Because he's "pretty"? Because he was in HSM? What is it? Other than his age, I actually think he's pretty good casting for Peter Parker/Spidey. I'd be interested in a very rational explanation as to why he is terrible that doesn't hinge on the fact that he anchored a billion-dollar Disney musical franchise.

HSM isn't my issue. Just doesn't feel like Peter Parker to me.

Good or bad actor aside he doesn't really capture the essence of the character in my mind.

Hey he may pull it off. It's just that to so many kids he is this cool and\or cute guy that is seen as one of the popular kids.
That doesn't mesh with Peter Parker for me. But you never know, he might turn out to be good enough actor to 'fool' us into believing.

Still think he's too old... Just think there is an opportunity to do a movie with proper teenagers, which no mainstream superhero movie has actually followed through with. Not even the first Spiderman because the actors were all too old and grew older faster during the franchise.

There you go. Does that help any?

Actually, my friend is one of the producers for Johnny Quest, and when he told me that Efron was being considered to play him I protested vehemently. But after watching 17 Again, I actually like Efron. He has a very good comedic timing, something they haven't fully explored in Spidey's personality yet. Spidey has been way too bogged down in melodrama. Plus they've been waaay over doing it with geeky guys getting hot girls lately, and I know a lot of good looking geeks who were never popular in high school, so it's not a far stretch. Plus, it looks like Efron is going to be taking a lot of chances wuth different roles if you look at his upcoming projects. Dicaprio has been able to make a very respectable career for himself after being dubbed a teen hearthrob early in his career. It wouldn't shock me if Efron does the same. Anyways, the fact that the budget is only 80 million dollars, should give a person more pause for concern than any pretty boy casting news.

The problem with him playing Johnny Quest Anonymous is that he may be good in "17 Again," but Johnny ISN'T 17. He's not a teenager... he hasn't even started to get an interest in girls yet. He's a typical boy that loves adventure and any romance in it would come from Race, not him. Not Johnny... he's way beyond any timeline in which he should be playing the character.

Perhaps if they make a young Ken doll movie he could play in it but Quest is in no way a character he should play.

Not the JQ that they have the rights to. They're planning on making a film using the names and twisting them into something that the classic Hannah Barbara cartoons are not.

So let him do "Fire" and whatever else he wants to do, but leave Johnny for someone else to play...

Oh, I still think he's wrong for Johnny Quest, I was talking about him playing Peter Parker. As far as the JQ movie goes WB was so scared about the box office returns for Speed Racer they didn't want to do another "kids" film so they decided to age up Johnny and make it a teen movie. I told my friend that was the most idiotic thing I'd ever heard. Speed Racer bombed for other reasons, plus they have the most successful franchise with a "boy" who started out pre-pubescent. The majority of executives in Hollywood are idiots, but fortunately it looks like JQ won't get made anytime soon. They only have a few slots open for the next upcoming years, and they have other projects that are a priority right now. I am a little worried that the Hobbit was pushed back, that frees up a slot for 2011. The only way JQ will get made the way it's supposed to get made is if a really good director steps up and says he wants to do it, but only if it's done like in the original animated film. Much like what happened with Watchmen. Now as far as Spidey goes, It's not the worst choice for that character. Besides, I just heard Disney/Marvel is going to be going full steam in trying to get their properties back, so they might end up postponing Spidey. So even if Sony does go through and it fails, you can bet Disney/Marvel will again be rebooting this puppy in a few years.

Quit the Efron-bashing, you morons!

Seriously, you're all acting like a bunch of discriminatory bullies!

Have your parents taught you all nothing about courtesy and respect, especially to those who are younger than you?!

Zac is older then me (Im 17). And, IMO, he's not a great actor. That's why I don't like him. Not sure how that is exactly discriminatory, but I think it's perfectly exceptable to not like an actor.

Plus, many people don't like the Spideman relaunch, so that could contribute to our lack of enthusiasm to this rumor.

Looks like Logan erman is in talks with Sony: