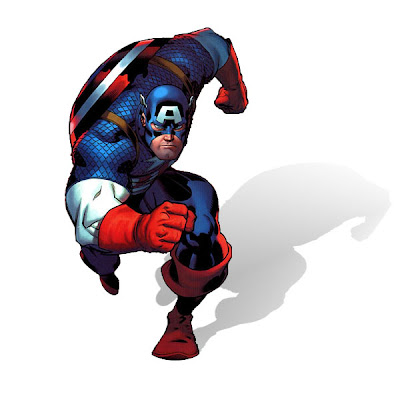 With "Captain America's" to start filming this summer, many are wondering the tone and setting of Marvel's Boy Scout...

Boxoffice Magazine has an interview with Joe Johnston, the director of the film about what fans and film goers alike can expect.

Many were wondering if it would be a period setting or it would be a contemporary setting. It seems that it'll be both. Kind of like "Saving Private Ryan" was; as in bookends. The bulk of the film will be set during World War II, but the beginning and ending would be set in the present. I'd guess that this is being done to set up "The Avengers" movie that will shoot right after this film. There's a lot of other interesting stuff he has to say about the project, so go over and take a look.

Hat Tip to Dark Horizons.
Posted by Honor Hunter at 8:14 AM

No faith in Joe...he messed up the Rocketeer and Jurassic Park, and the Wolfman has been a mess.

Using as much of WW2 is ideal and IMO the best chance of success to really set it apart from typical and often quite boring 'origin' movies.
Modern day bookends are essential if they are tying Cap A into the Marvel moviverse, so thats to be expected. Hope they don't let that become too cheesy.
This is perhaps a strange request and that it that the movie is not too US nationalistic.

There should be a lot of international shooting and they should showcase Cap A as the soldier of world freedom as opposed to a soldier of the US gov.
Big up the combined efforts of the nations as opposed to the US fixit mentality.

Hoping for a sly cameo or two during the WW2 scenes. The Invaders, Union Jack, an 'unnamed' canadian soldier with mutton chops and a bad attitude. Not big roles but Cap A must have some interaction and support from the fellow soldiers from around the world, and that other nations are fighting battles.

Joe Johnston didn't do a great job on JP3, but I don't blame him for the failure or deluded script of the Rocketeer.

That is reserved for the current head of DreamWorks Animation. That's where you should place your distain, not with Joe.

The Rocketeer was amazing! Disney mishandled the release and downsized the budget, but the film itself is wonderful. It's one of my personal favorites. As for JP3, it was fun for what it was, a matinee-style adventure sequel.

I LOVED the Rocketeer! Joe Johnston is PERFECT for directing Captain America. I also enjoyed JP3 much more than Lost World but you can tell when the money ran out because the film just abruptly ends just when it was getting exciting. Can't wait to see Steve Rogers fighting Red Skull in WW2.