The Other Side Of Sleeping Beauty... 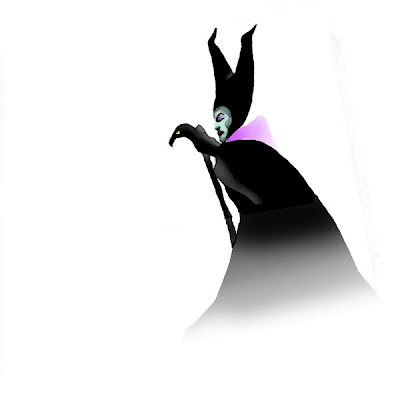 I suppose you've seen the rumors on the web about another possible Disney reinterpretation from Tim Burton...

I actually wrote a post that I never published on Aurora's Nemesis last year. I didn't get around to finishing it, so maybe I'll go back and find it sometime this year. But about that rumor, the one about Tim doing to "Sleeping Beauty" what he's done to "Alice in Wonderland." This time told from Maleficent's point of view. That would be a cool project to me. It certainly explains why the Mouse registered that "maleficentmovie.com" domain name last year.

But we have to remember that Burton is a very busy man and unless a hole frees up in his schedule then, even if it's true you won't be seeing this for four or five more years. He has that stop-motion animation project for Disney that is in pre-production right now and then there is "Dark Shadows" which is supposed to start filming later this year. Now, that movie has had many delays and it appears they're having script problems. That right there would be your opening, but that presumes that they already have a script for this twisted take on Sleeping Beauty. And then you have to ask, what part will Johnny Depp play? Prince Phillip? That said, the prospect of seeing the Dark Fairy turn into that purple dragon in live action sounds like an amazing night at the movies.

I'm not quite sure what to think of this.

But whatever happens, happens.

Nice pic. Who'd you steal that one from?

How would they pull that one off? Don't you think it would be rather hard to top the original?

I'm jazzed about Dark Shadows, now that should be an excellent movie from Burton.

Interesting. Assuming this is actually to be produced with Walt Disney Pictures; I would be more impressed with Burton and Disney's continued partnership than the actual idea suggested here. Not that this isn't an interesting idea - or couldn't be a great film.

getting tired of Tim Burton re-imagining properties. Leave these films alone and do something original.

Hard to top the original. Interesting though this may be, I would like to see it. A Live Action Sleeping Beauty would be great, and Burton is a likely person, however I would also see if if Guillermo Del Toro did it and heck, it'll be great if Terry Gilliam does it, THAT would be interesting. From Maleficent's point of view would be good, but maybe just make it live action, but also focus on her story, still sticking to the format of the original instead of a whole new take on it. I plan to see Alice in Wonderland. I love DIsney and I think it'll be great to see these movies live action, heck maybe Ridley Scott's Robin Hood, which I'm very anxious to see, is a live action interpretation of Disney's Robin Hood, mwahahahahahaha.

Her name is "Maleficent", and Disney registered "maleficentmovie.com". The spelling you used, "Malificent" is incorrect. Just check any official Disney book, character guide, or even the menu on the Sleeping Beauty Blu-Ray.

I agree with Mike Luzzi. Wouldn't it me nice to see something original instead of constant remakes?

Male Ficent said: "Nice pic. Who'd you steal that one from?"

I got it cheap from the artist. Actually, he gave it to me for free.

If this came true, I'd be more excited about watching it than Alice in Wonderland! I love Sleeping beauty, and I think Maleficant's POV and Tim Burton's twists would make a magical movie. But first I'll see how Alice turns out and I'll have a more informed opinion.